Back to School for the Sensitive Child 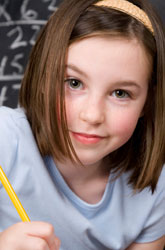 When you think of a sensitive child, you might picture a sudden outburst of tears or quiet whimpering in the corner—both in response to what seems like… well, absolutely nothing!

According to Elaine Aron, clinical psychologist and bestselling author of The Highly Sensitive Person—originally published in 1996 and since translated into six languages—this describes only a small slice of the sensitivity pie. Aron, who has researched and published extensively on highly sensitive people (HSP), says the sensitive child is one who takes everything into account before acting. This is in contrast, she explains, to the child who acts before considering the possible consequences of his actions.

“We often see a child holding back, not joining a group, and doing nothing while they are observing,” Aron says, “and we assume it’s out of fear, out of shyness, but it could be out of a desire to process.”

Aron explains that sensitivity is innate. It is an “inborn temperament or style that is found in about 20 percent of children and of nearly all animals.” One out of five children is highly sensitive. What does sensitivity look like in a child? Aron points to the following characteristics:

You might read this list and find that half the items fit one of your children and the other half fit another. Aron says there’s a scale or continuum for sensitivity, just as there is for many things in life.

It’s important to recognize, Aron says, the difference between sensitivity and shyness. “Sensitive children can more easily become shy,” Aron explains. “These children are often labeled as shy. And if you hear enough times that you’re shy, you become shy. I think people should be very cautious about the use of the word shy. It should not be used as a label but rather to describe an emotion.”

But Renee Gilbert, a clinical psychologist who specializes in shyness and social anxiety, says she has a problem with that theory. “If your child is shy, people are going to come to that conclusion on their own,” Gilbert says. “It’s hard for me to believe that the label is worse than the natural outcome.” Gilbert encourages parents to list for their shy or sensitive child famous, successful people who were like the child—a list of presidents, celebrities, singers, inventors, business people. “It has more to do with how you create a label,” Gilbert says. “And if you present it with whatever your child’s strengths are, then you’re actually being proactive.”

Gilbert and Aron both agree, however, that sensitivity can sometimes lead to anxiety in children. And they both agree that managing anxiety is an important skill for children to learn. “Anxiety is absolutely normal,” Gilbert says. She explains that one of the best ways parents can help their children manage anxiety is by modeling appropriate behaviors. “Sensitive children can be very aware of their failures,” Gilbert says. “It’s absolutely critical for parents to take the stress off the kids at home—make it okay to make mistakes.” She suggests that parents laugh at their own mistakes and, in general, frame failure as feedback. “Parents should reward the effort,” Gilbert says, “not the outcome.”

Though sensitivity and anxiety are often thought of in negative terms, they can also be looked at in a positive light. “Who knows who’s too anxious until something bad happens,” Aron says. “Being anxious is situational, and whether it’s appropriate or inappropriate is all a matter of odds.”

Which leads Aron to her most important piece of advice for parents of sensitive children: Don’t pathologize sensitivity too much. She points out that sensitivity can, in fact, be an advantage in certain situations. “Sensitive children usually don’t get into trouble, they listen to cautions—people focus on the negative and they don’t realize that temperament is a package deal,” Aron says. “‘He’s such a good boy, but he’s a coward.’ Well, that’s the same thing!”

What can you do to help your sensitive child prepare for the new school year? Here are a few tips from Aron and Gilbert:

Help your child feel comfortable in the environment.

Provide and enlist support for your child.

Ask you child’s teacher from last year to suggest the teacher who would be best match for your child this year. Aron says principals will often accommodate a child with an unusually strong temperament. Even though it’s late in the game now, trust your instinct if you think you could enlist better or more support for your child.

Set the stage so your child will fit in.

Gilbert says you want to be careful not to take away your child’s individuality, but you also want to make sure she’s more alike than different than other kids in the class. Talk to the teacher from last year to find out what skills your child should have, what games other kids played on the playground, what kinds of book bags they carried. You can use these last few weeks of summer to practice skills and to stock up on a few items that will make your child feel a part of the group.

Educate the teacher and other adults in your child’s life.

Gilbert says it can be helpful to let the teacher know that your child is sensitive and often takes time to observe before getting involved. Just be sure to paint your child’s sensitivity in a positive light. And offer to help in any way you can.

Aron says that because sensitivity is innate, it is well worth helping a sensitive child understand this about himself. For example, you might say, “I know that you were a little hesitant to join groups of kids at school last year, so I was thinking we could practice how you can join in when you get to school in a few weeks. Sometimes when we practice things ahead of time, we feel a lot more comfortable.”