Should Schools Be the "Fat" Police? 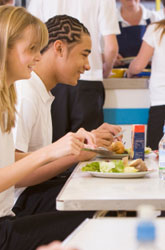 Childhood obesity has more than tripled in the last 30 years. The growing number of overweight kids has become a concern for schools nationwide, and many have taken action by assessing students’ weight as part of campus wellness programs—often to mixed public reaction. Should schools act as the “fat police”?

While the role of schools in obesity prevention is complex, many pediatric healthcare experts agree that it’s important to start somewhere. “Schools are in a challenging situation with regard to childhood obesity,” acknowledges Rebecca A. Krukowski, PhD, an assistant professor at the University of Arkansas for Medical Science College of Public Health. “There is little to no funding for childhood obesity prevention programs or interventions in the schools, yet since most children attend schools, it is often looked upon as a valuable opportunity for programs related to childhood obesity.”

Robert Murray, M.D., the Director of the Center for Healthy Weight and Nutrition at Nationwide Children’s Hospital and a Professor of Clinical Pediatrics at The Ohio State University College of Medicine, echoes this view, saying, “Trying to bring healthcare efforts into the community and get them more engaged is a good impulse.” And this epidemic is not one schools can afford to ignore: the Center for Disease Control reports that obesity leaves kids vulnerable to depression, hypertension, diabetes, osteoarthritis and cancer down the road—problems that not only threaten quality of life, but take an economic toll on whole communities.

Flagstaff Unified School District in northern Arizona is one of those schools taking the fight against childhood obesity into the classroom. They recently conducted weight and measurement assessments and sent home letters to parents indicating whether children fell into percentiles considered underweight, a healthy weight, overweight or obese. The letters were part of the district’s response to a growing problem in the area: a high percentage of Flagstaff’s children, according to a district nurse, are either overweight or obese, with obesity-related diabetes on the rise even amongst toddlers. The letters also recommend follow-up visits with doctors and provide healthy nutrition and exercise guidelines. FUSD’s program, which partners with local organizations to combat what has become a national problem, is typical of many such programs in schools across the country.

Whether or not these school outreach programs work has everything to do with how they are framed, says Murray. Much of the parental backlash has to do with the sensitivity of the issue—what parents wouldn’t worry about their preteen being teased for bringing home a “fat letter”? But many of the letters that will go home with kids across the nation only specify their BMI, or body mass index, percentiles. “BMI screening provides a number or a weight status classification—just information— that is not inherently offensive or cruel,” assures Krukowski.

The BMI is a measure of body weight in proportion to height that provides an indicator of approximate total body fat. Though not a perfect measurement (it’s possible for a healthy, athletic 15-year-old, for example, to measure overweight if much of his weight is muscle mass), it’s a good diagnostic tool when a physician can put the numbers into context. “BMI can be extremely effective,” Murray says, pointing out that parents need to be reassured that it is merely a screening tool, “not an assessment of cosmetic appearance.”

Other parents are concerned about the framework and resources provided by schools when students take home such letters—effective intervention doesn’t end with a letter in every backpack. “For schools to just categorize the kid misses the point,” Murray says. “The next step should be the families putting this into context with their doctors. They need to be told to follow up.”

Take-home assessment letters are just a small part of interventions going on in schools across the U.S. Most schools have at least adopted a basic program of physical education for their students, and many have overhauled their school lunch programs and swapped out the stereotypical grease-soaked cafeteria pizza for healthier fare. President Barack Obama recently signed into law a measure that will raise nutrition standards in schools. School screening and intervention can be effectively used with such programs when healthcare providers are trained well and programs include follow-up with trained physicians.

Columbus City Schools, for example, in Columbus, Ohio, have mandated BMI screening as part of their Wellness Initiative campaign. “40% of our children were obese,” Murray estimates, “and 30% were showing signs of insulin resistance.” Aware that such widespread health problems would impede student learning, CCS partnered with Nationwide Children’s Hospital and called for testing on weight, BMI, hypertension and acanthosis nigricans, or a skin marker for high levels of insulin. The assessments lead to more resources, better school food choices and increased physical activity for students. Years after the program’s inception, “the environment is definitely changing,” says Murray.

And healthcare experts hope it will continue to change as schools experiment with programs to fight childhood obesity. “There have been several schools that have tried innovative programs—provision of water, fizzy beverage interventions, farm to school programs, BMI screenings, “ Krukowski adds. “However, at this point, we don’t have a definitive answer as to what is successful. Schools are likely to just be one piece of the pie.”

Over 95% of children spend around seven hours a day in school, making it a good place to educate them on healthy lifestyle choices—and health screening in schools can be part of that education. The Center for Disease Control offers ten strategies for schools wanting to promote physical activity and a healthier standard of living. “The great news,” sums up a CDC bulletin, “is that schools can help students and staff adopt healthy eating and physical activity behaviors that are the keys to preventing obesity.”

Next Article: Childhood Obesity Campaign Seeks to Get Nation Moving
We enable strictly necessary cookies to give you the best possible experience on Education.com.Cookie policy