Legislators Fail to Put Schools on a Diet 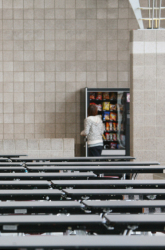 Most people would agree that our understanding of nutrition has changed significantly since the 1970's—when Little Debbie Cakes and tater tots ruled the day. Despite this, current regulations on the sale of junk food in U.S. schools date back thirty years. The most recent attempt to bring school nutrition policies into the 21st century sank like a double bacon cheeseburger. A group of education nonprofits and bipartisan representatives—with the support of the food and beverage industry—worked together on creating new nutrition standards as part of an amendment to the Farm Bill. The Farm Bill passed in the Senate December 14th, 2007. The problem is that it no longer includes the amendment which would have decreased the amount of fat and sugar sold to kids in vending machines and snack bars.

And this is not the first time around for this piece of legislation. Senator Tom Harkin, Democrat of Iowa and chairman of the Agriculture Committee, has twice introduced similar bills which deal with foods in school not covered by the school lunch program.

The reasons for dropping the amendment, coined the Child Nutrition Promotion and School Lunch Protection Act, are puzzling to say the least. Especially when we pause and consider the numbers. According to the Government Accountability Office, 99 percent of high schools, 97 percent of middle schools, and 83 percent of elementary schools have vending machines, school stores, or snack bars—all of which sell the soda, sports drinks, snacks and candy which are adding on the pounds. Literally. Margo Wootan, PhD., a nutritionist and the director of nutrition policy for the Center for Science in the Public Interest, says she has used numbers from the American Beverage Association to determine that soft drinks are the number one source of calories in the diets of teenagers today. The amount of sugary drinks that a typical teenager consumes on average in school is enough to add 6 pounds onto his frame in four years of high school, according to Wootan's analysis.

The point of this most recent amendment was to eliminate a child's access to those sugary drinks and snacks in school. The new standards would have allowed only plain bottled water and eight-ounce servings of fruit juice, or plain flavored low-fat milk for elementary school and middle school. In terms of high school, the proposed changes were more gradual: drinks with up to 66 calories per eight ounces could be offered, but that threshold would drop to 25 calories per serving in five years. Foods sold in all schools would have followed stricter guidelines when it comes to calories from fat, saturated fat and sugar.

That's a huge shift in policy, and one that falls in line with what we've learned about nutrition since the days when donuts, ice cream, pizza, French fries, cookies and chips all had their respective places on the food pyramid. (Note: all of the foods in that list are currently offered to children in schools across the country under the current regulations.) “The definition of what junk food was in the 1970's doesn't even consider calories, saturated and trans fat, salt and other key nutrition concerns,” Wootan says.

But in addition to reflecting what we've learned, Wootan says our new policies need to correct a growing and disturbing trend among children: obesity. “In the 1970's, our biggest concerns were vitamin and mineral deficiencies, and dental cavities. Now there's childhood obesity and high cholesterol that are clearly linked to nutrition,” she says.

To be fair, there are some limits on the junk food currently being sold. For example, they've put the vending machine outside the cafeteria, so that kids will have to walk an extra three feet to score their chocolate bar.

The one ray of light is that huge strides have been made in improving the nutritional quality of school lunches over the last decade; reducing the amount of fat, salt and cholesterol dished out to kids during lunch time. Wootan says the next step is to get rid of the typical vending machine fare that competes with those healthy meals. “If you offer kids a choice between a brownie and an apple, it's not hard to imagine what they would pick,” Wootan says.

So, where were our lawmakers when this amendment fell on their desks last year? Wootan says there are complicated procedures to manage a huge bill like the Farm Bill, and it's no surprise that this small, albeit important, amendment was lost in the shuffle. Even the best ideas introduced in the Senate take years to pass. The good news is that the Child Nutrition Promotion Act is closer to getting passed now than it ever was. Careful negotiation has garnered the support of national consumer and education groups, and industry giants like Coca-Cola, Pepsi-Co, and Frito-Lay. “The issue of school foods has really evolved over the last five years, from when the food and beverage industry fought us every step of the way, to finally recognizing that schools are a unique place where the food environment should be different,” Wootan says.

Even though the effort has been dropped this time around, the concept isn't about to fade into the background. With 140 cosponsors in the house and senate, plus the support of the food and beverage industry, Wootan says schools may see an upgrade in nutrition standards in as little as a year.

If you feel strongly about this bill and would like to contact your congressional members, go to www.congress.org and type in your zip code.

For more information about child nutrition visit the nutrition section of the Center for Science in the Public Interest at www.cspinet.org/nutritionpolicy