The Science of Tantrums 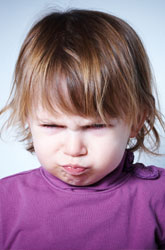 It starts with a whine. Then, a yell. Suddenly, there is kicking and screaming. That’s right, you’re caught in the middle of a full blown tantrum. But there is new scientific analysis of temper tantrums that can help put you as a parent back in control.

For years, we were under the impression that tantrums were structured with two separate emotions: anger first and sadness afterward. But, says Michael Potegal, professor of pediatric neuroscience at the University of Minnesota, in a report by NPR, "The anger and the sadness are more or less simultaneous."

Potegal and psychologist James Green, from the University of Connecticut, recently published the findings of their study. The scientists rigged bedtime onesies with high-quality wireless microphones in order to analyze the acoustics of a tantrum. They had 13 volunteer families, with toddlers aged 2-3, who were recorded while throwing a fit. When plotted on a graph, these recordings showed sad sounds—whimpering and crying—occurring throughout. But the anger sounds—yelling and screaming—showed up as sharp peaks overlaid on the sad sounds. This suggests that the anger and sadness happen at the same time.

And, according to Green and Potegal, no matter how long a tantrum lasts, or how often they occur, they tend to follow the same pattern:

Phase 1: Yelling and Screaming. The recordings from this study show that peaks of anger tend to come early in a tantrum. Green comments, “It is common for tantrums to start with yelling, especially if there’s a goal that the parent has in mind that the child doesn’t have in mind.” But on the bright side, they found that this phase ends rather quickly. In fact, in cases where the parent stayed quiet and ignored their child’s angry noises, this yelling phase would end in a minute or less.

Phase 2: Physical Actions. Most parents see physical actions as an escalation of anger. But in fact, this phase represents the downward slope of angry emotions in a tantrum. “Once she’s thrown herself on the floor and thrown something,” says Green, “we’re probably on the downside of this tantrum.” By this point, kids have used up lots of energy. The screaming and physical actions will tire them out, and again, in cases where the parent ignores these actions, the child eventually realizes that she’s been out of control.

Phase 3: Crying and Whining. At this phase in the tantrum you’ve made it past the peaks of anger, and all that’s left is sad emotions. Green and Potegal agree that this should be the first time that a parent intervenes in the tantrum. With the anger gone, the child will seek comfort from you instead of fighting against you.

So what does this mean for the next time your child has a tantrum? Here are five tips that can get you through the storm quickly.

1. Ignore it. This will be very difficult. But it may be the most important and effective tactic for dealing with a tantrum. Most parents get caught in what Green and Potegal call “The Anger Trap.” This means that you may do anything and everything to try and hush your screaming child. But ever notice how talking to them tends to make things worse? The next time your little one is in a fury, try keeping quiet for as long as you can, and just wait it out to see what happens.

2. Use simple, short commands. This is a good alternative if you cannot ignore your child for long, especially when you’re in public place. Stick to the simplest speech possible, for example, “Sit down” or “Please stop” or even something as simple as “No”. A tantrum is not a place for reasoning or clear communication, so get to the point quickly, or don’t say anything at all.

4. See the humor in it. This is a great coping mechanism to help you stay calm and relaxed. If you’re getting angry, your child may stay angry for longer too. Try to remember how comical the situation is—one example that Green and Potegal discussed was a girl who threw a fit, yelling nonsensical things like, “Take off my feet!” Or maybe your crying child puts his words into funny phrases, like: “Me no-likey shoes!” Keep yourself in a light-hearted mood, and the tantrum will seem to pass more quickly.

5. See it from a scientist’s perspective. After analyzing these awful screams and cries, Green and Potegal now see tantrums as interesting, rather than irritating. Plus, it may help if you find a unique pattern within your child’s tantrums. Remember: while tantrums can be traumatic, they’re normal behavior for a toddler.