No End In Sight for Swine Flu Vaccine Shortages 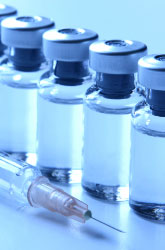 Collect This Article
4.0 based on 3 ratings
by Education.com

In Rockland County, New York, like many other places in the country, there isn't enough of the H1N1 vaccine to meet the demand. Only in the past two weeks has Dr. Alanna Levine received the flu shots that can be given to higher risk patients - those with diabetes, asthma and other conditions that make them particularly vulnerable to swine flu.

To make sure the valuable vaccine gets to the patients with the greatest need, Levine is taking names and creating a priority list of those who can get the pandemic flu shot while the supplies last. The phone is ringing off the hook at her Tappan, N.Y. office, and the excruciating answer for some parents is simply to wait until more flu shots arrive.

"It's a horrible position to be put in," Levine said.

But that's exactly the position she and other providers of the H1N1 flu vaccine find themselves. Though the Centers for Disease Control estimated this summer that about 40 million doses of the vaccine would have been available by Oct. 30, the actual figure was about 25 percent less. On Thursday, CDC officials said the latest tally of vaccine doses distributed throughout the country stood at 41.6 million. Five manufacturers have been contracted to produce a total of 250 million doses of the vaccine.

Officials have had to scale back original predictions on how quickly the flu shots and flu mist would get to the public, citing unanticipated difficulties in the production process. The H1N1 virus grew slowly and didn't produce as much vaccine as other flu strains, CDC officials have said.

Meanwhile, Swine Flu continues to rampage through most of the United States, with an estimated 22 million cases in the first 6 months of the pandemic, a period ending Oct. 17. More doses of the vaccine are available every week, but consider this sobering fact: In a normal flu season, the peak of reported flu cases normally is reached between January and March, according to Jeff Dimond, a spokesman for the CDC.

Dimond said it's impossible to know if that will be the case with H1N1 this season.

For Dr. Christopher Tolcher, who works in a practice just outside of Los Angeles, Calif., with 7 other doctors and staff, this has already been a flu season for the ages.

"We have never been this busy in so sustained a period of time," he said. "It's a combination of seeing a lot of flu cases, dealing with Swine Flu fears . . . A perfect storm, so to speak."

Tolcher, who has been a pediatrician for 17 years, said his Agoura West Pediatrics practice received 1,200 doses of the flu shots about 2 weeks ago—only 20 percent of its order—but quickly used up the allotment. They are waiting for more of the vaccine and, like Levine and so many others, telling patients they can't help them right now.

"It's been very frustrating and disappointing for us and the families," he said. "They are hearing how bad Swine Flu is and how important it is to get the vaccine and that's what they're trying to do."

At the CDC's weekly briefing, a spokeswoman said officials hope the situation will get better as more and more shots are produced and delivered each week. But Dr. Anne Schuchat, director of the National Center for Immunization and Respiratory Diseases, said Thursday there's no predicting how long shortages will remain. This week, for example, weather problems throughout the country contributed to shipping delays, leading to only about 5 million doses going out instead of 8 million.

"We are going to continue to have challenges with this pandemic and I think it's important to realize that this is a marathon and not a sprint. It's the virus that's the enemy here, but together I am sure we can get through this."

For parents who are stymied in their efforts to get their kids vaccinated, the options are limited, officials said:

November 16, 2009
Next Article: Swine Flu: Is a Third Wave Coming?
We enable strictly necessary cookies to give you the best possible experience on Education.com.Cookie policy