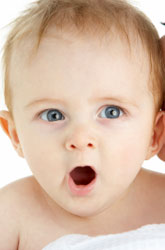 It’s the third night in a row that your baby has fussed, whined and resisted her normal 7:00 bedtime—and the sleep struggle is beginning to take its toll on both of you. What’s going on?

Too often, parents fall into the habit of putting their little one down to sleep at a certain time, relying purely on the clock—instead of examining the day’s events and waiting for telltale signs that their child’s ready for rest. By familiarizing yourself with your baby’s sleepy signals, you’ll have the know-how to put her to sleep at the right moment—avoiding a bedtime battle. Help identify and respond to your tiny dreamer’s sleepy signs—so she’s able to catch the z’s she needs—with these tips:

From spacing out to screaming, every child has her own way of showing you she’s tired. Keep an eye out for some of these more common symptoms of fatigue. Your tired tot may demonstrate one or more of these signs that tell you she’s tired and ready to sleep—now:

Babies often don’t have the ability to recognize when they’re tired, so it’s up to you to keep an eye out for the signs listed above, or even something entirely different that you’ll eventually able to recognize as a sign she’s ready to hit the hay. These sleepy signs may change at each stage of development, so get into the habit of looking for unusual behavior toward the end of her “happy wakefulness” period of time. By looking out for symptoms of fatigue, you’ll be able to get your child the sleep she requires without a battle at bedtime.

Parenting educator Elizabeth Pantley is the president of Better Beginnings, Inc., a family resource and education company. She is also the author of twelve parenting books, including the popular "No-Cry" series.

Next Article: The No-Cry Sleep Solution: Moving from Crib to Bed
We enable strictly necessary cookies to give you the best possible experience on Education.com.Cookie policy