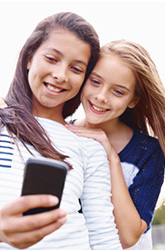 For kids in elementary school, it's probably too early to be thinking about college. But with kids using social media at younger ages than ever, it’s not too early for them to learn about protecting their online reputation.

Whether your child has an Instagram feed sprinkled with photos from an unsupervised house party, or a few innocent Facebook posts about being bored in class, she could send the wrong signals to colleges years before she fills out her first application.

In 2013, Kaplan Test Prep surveyed 381 admission counselors from colleges across the country and found that 29 percent of them search applicants on Google and 31 percent check applicants' Facebook profiles—both numbers are the highest ever. Thirty percent of the time, counselors found something in these virtual inspections that negatively affected a student's chances of being accepted, down from 35 percent in 2012.

Counselors don't have time to Google every applicant or search for their Facebook page. But Kaplan found that admission officers sometimes check on social media if something on a student's application seems exaggerated or too good to be true. “Social media serves as sort of a wild card,” says Jeff Olson, vice president of data science at Kaplan Test Prep. “There is a chance that it could come into play.”

Angel Perez, vice president and dean of admission and financial aid at Pitzer College in Southern California, says counselors may be tipped off by current students, usually after an applicant has spent some time on campus with a student host. If the current student sees something disturbing, the student might alert the admissions office. Perez says activity that casts a student in a negative light could change an admission decision from a yes to a no.

If worrying about college admissions so early in your child's life seems overbearing, keep in mind that social media isn't going away. It's a part of life for people of all ages. Job opportunities and personal friendships can be affected, positively and negatively, by social media. Using it responsibly is something everyone should know how to do.

Next Article: The College Application Process: Helping Your Teen Cope
We enable strictly necessary cookies to give you the best possible experience on Education.com.Cookie policy