Log in with different email
For more assistance contact customer service
Outside the Classroom
Technology and Learning
Spatial Thinking: Why Low-Tech Learning Matters 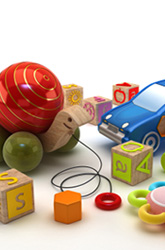 While tablets, laptops and smartphones conveniently offer children a big boost in education basics like reading and math, offline playtime can have as many benefits as "virtual" learning games.

When it comes to learning, the material world is still valuable. Spatial thinking, or “3-D thinking,” is especially effective for strengthening the roots of higher level learning in very young children. Researchers at the University of Washington concluded that children between 1½ and 2½ years old who played with letter blocks gained valuable language development. In the 2012 study, Effect of Block Play on Language Acquisition and Attention in Toddlers, children who were given blocks to play with had significantly higher language scores at the conclusion of the study than those who didn’t.

Michelle Garrison, Ph.D., one of the authors of the study, says there are multiple reasons why playing with tangible toys improves language ability. "Parents talk to their children less when a screen device is on, which means that exposure to language can be decreased." she says. "There's also some reason to believe that screen media may take up so much of a child's attention that they may not listen, look at the parent and respond to a parent's language to the same degree that they would during play with tangible objects."

In a related study published in 2011 in the journal Mind, Brain, and Education, researchers found that when parents and children played with blocks together, adults frequently used words such as "over" and "around,” which reinforced crucial spatial skills, a building block to later math success.

To strike a balance between virtual and real-world playtime, keep these simple things in mind:

Remember, when you share a moment with your child that has no on or off button, you may not be able to measure his progress right away, but the possibilities for learning are endless and the benefits are real. With no "right" button to push, and no beginning or end to your time together, playtime is a never-ending story.

Next Article: 8 Essential Writing Apps for Kids
We enable strictly necessary cookies to give you the best possible experience on Education.com.Cookie policy