Log in with different email
For more assistance contact customer service
Outside the Classroom
Television Exposure
Is SpongeBob Bad for Your Preschooler's Brain?

Is SpongeBob Bad for Your Preschooler's Brain? 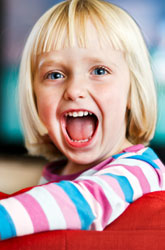 We all know that TV isn’t the best thing for us (or our kids), but can TV actually hinder our brain power? A recent study released by the American Academy of Pediatrics in their journal Pediatrics found that brief exposure to Nickelodeon’s famed TV series “SpongeBob SquarePants” impeded preschoolers’ attention span and executive functions. It argues that the fast-paced storytelling and quick cuts of the Bikini Bottom show are decreasing smarts in preschoolers.

Susan Linn, co-founder of Campaign for a Commercial-Free Childhood, says that the show “deprives children of opportunities to explore in a leisurely and in-depth way, which is essential to learning.”

A group of 20 4-year-olds were tested after watching SpongeBob for just 19 minutes, and compared against another group of 20 children who watched Caillou, a slower-paced popular PBS show. A final group of preschoolers colored for 9 minutes and steered clear of the tube.

The kids who watched SpongeBob, which changed scenes every 11 seconds, did significantly worse on tests than both the Caillou kids, and those who colored. The theory is that overstimulation during the time when a child’s brain is developing makes it harder to focus on sustained tasks later on. Reps for Nickelodeon argue that SpongeBob is intended for kids 6-9 years old, though the show itself is heavily marketed to and for preschoolers. While the study comes with loads of its own caveats, the results of the study are just another confirmation of what researchers have been saying for years.

What to Look For

So what can parents do about it? If you are going to allow your preschooler screen time (and chances are they’re going to get it anyway), there are a couple of things every parent should look for in a good TV show for their kids.

At the end of the day, parents want to know, “OK. What can my preschooler watch?” Should you choose Dora or Sesame Street? We asked two experts, Deborah Linebarger and Betsy Bozdech, Executive Editor of Common Sense Media, which shows they thought were Must See TV for preschoolers. Here are 5 shows they love:

A few additional tips: avoid commercials whenever possible. If you’re able, watch television on demand, rather than in real time. It’s very hard for kids to distinguish between a commercial and a program, which can be problematic when it comes to mismatched marketing. If your child does see a commercial, talk about what the intent of a commercial is. Also, don’t be afraid to set limits. Rules surrounding how much TV, when to watch, and what’s on the screen are all key to ensuring your kid’s getting the most out of her tube time.

Linebarger says programs developed using a curriculum to convey educational messages can positively impact academic achievement through childhood and adolescence. Ultimately, parents should look for programs with lots of interactivity, a narrative format with a slow pace, and explicit claims about the educational benefits of the show.

No matter how much screen time your kid’s getting, be sure she’s getting lots of time to explore outside, use her imagination, and of course play!

Check out Campaign for a Commercial-Free Childhood’s “Take Action” initiative for parents to tell Nickelodeon to shelve their marketing to preschoolers.

Next Article: The Development of Mental Abilities
We enable strictly necessary cookies to give you the best possible experience on Education.com.Cookie policy