10 Ways to Stop Your Child from Biting 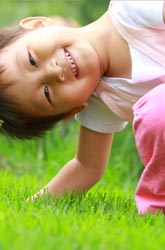 From the day we are born, we use all of our sensory organs to take in information from the outside world and put it together to form ideas about how the world works. Babies watch, listen, smell, touch, and taste – sometimes what we want them to, and sometimes what we don’t!  As they grow, children learn society’s rules about what behavior is appropriate, but sometimes it can take quite a bit of practice when it comes to understanding how to communicate their feelings and desires.

One of the areas in which many children have difficulty at some point is biting. The mouth is incredibly sensitive, so very young children tend to use their mouth to investigate the surface or shape of an object. Repeated sucking or biting motions can also be calming for children. In addition, young children may resort to biting as a way of communicating a need or emotion that they have not yet acquired the language to express, similar to the reasons underlying hitting or throwing a tantrum.

Because they become accustomed to using their mouths to explore the world around them, to communicate their desires without language, and to calm themselves down, children must be specifically taught that biting others to serve these needs is not okay and that they need to express themselves in other ways.

Almost all children bite at one time, but most children will stop after being instructed to do so (though you may have to repeat the lesson a few times). By the time a child has turned three, biting should be rare. If children are still biting long after they have turned three, addressing the behavior and the underlying issues for it should be a main priority.

Some ideas for dealing with children who bite include:

If your child continues biting despite using some of the above ideas (and particularly if your child continues to bite while the majority of other children his age have outgrown biting), consult your pediatrician, as there may be physical or developmental difficulties that need to be addressed.

Next Article: Classroom Management Techniques
We enable strictly necessary cookies to give you the best possible experience on Education.com.Cookie policy