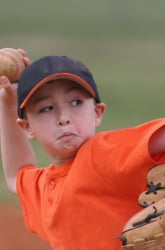 Many parents encourage their kids to work hard and play hard. But a new study shows that the equipment they wear when they play might not adequately protect children from harm.

The study, presented this Spring at an American Heart Association meeting in Chicago, showed that athletes who play sports like football, lacrosse, baseball, or hockey – even those who use the best available equipment – are not safe. If a strike to the chest occurs over the heart at a specific time in the heart’s cycle, children can die before medical attention arrives. These sorts of blows, called commotio cordis (latin for “commotion of the heart”), can trigger ventricular fibrillation, an irregular heartbeat that is a leading cause of sudden cardiac death in young athletes.

Researchers studied 182 cases of ventricular fibrillation suffered by child athletes who’d received blunt blows to the chest during practice or games. Some were struck by errant hockey pucks, some by balls, others by tackle or physical blows. Nearly 40 percent of the kids died, despite the fact that they were wearing protective gear. The average age was 15 years old.

All the victims were wearing standard, commercially available chest protectors, but they were not enough to protect them. Dr. Barry Maron, director of the Hypertrophic Cardiomyopathy Center at the Minneapolis Heart Institute Foundation and the report’s lead author, said that safer equipment is desperately needed in youth sports. “Hopefully,” Maron said, “these data will represent a stimulus for developing a truly effective chest barrier that will be absolutely protective against the risk of these commotio cordis catastrophes.”

Next Article: Meniscus Injury - Cartilage Tear and Athletic Activities
We enable strictly necessary cookies to give you the best possible experience on Education.com.Cookie policy