A New Supreme Court Judge: Will It Affect Schools? 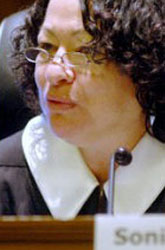 History was made this year when the Senate confirmed Judge Sonia Sotomayor as the first Hispanic Supreme Court Justice.

“It’s about time,” says Scott Swail, President and CEO of the Educational Policy Institute, headquartered in Virginia Beach. “It’s always been relatively white and male out there.”

Those who have been looking for balance in the courts are welcoming Sotomayor’s confirmation, while others are concerned that she might bring to her new position a particularly liberal judicial philosophy.

After her appointment in the spring, interest groups began looking carefully at her rulings over her 17-year career on the federal bench; those concerned with education found little, yet her rulings did lead to some discussion. Some of her more controversial education-related cases included issues of racial discrimination, learning disabilities, and freedom of expression.

Here’s an overview of her rulings on three prominent cases:

Gant v. Wallingford Board of Education

In this 1999 case, a student’s family alleged racial discrimination against a Connecticut elementary school. The first-grade student was demoted to kindergarten and the child’s family claimed that his demotion was due to racial name-calling (the child was the only black student in the class) and that the decision was made without the family’s consent. Sotomayor agreed with the other judges on the panel to dismiss the case, rejecting the claim that the school reacted with “deliberate indifference.” However, Sotomayor also said that race could have played a role in the decision to demote the student—that “a jury reasonably could conclude that the school did not give the black student an equal chance to succeed (or fail).”

Frank G. v. Board of Education of Hyde Park

In this 2006 case, Sotomayor ruled with the other panel judges that parents of a student with learning disabilities can get reimbursed for private school tuition, even if the student has never received public services from the school district for the disabilities.

Sotomayor’s ruling on this 2008 case found that a high school student’s blog remarks created a “foreseeable risk of substantial disruption” in the school and therefore the student was not granted a preliminary injunction to reverse the school’s disciplinary action against her.

Some have seen these rulings as indication that Sotomayor will lean far left in future rulings, but many educational policy experts say the evidence suggests she is a moderate when it comes to issues in education, and that there will not be any immediate and obvious consequences for schools.

“With Sotomayor I think you’ll get a thoughtful jurist who comes from a particular background, so she’ll be sensitive to some issues,” said Jack Jennings, President and CEO of the Center on Education Policy in Washington DC. “But I certainly don’t get the impression that she will be set on making law on these issues.”

Jennings points out, though, that Sotomayor doesn’t have a particularly extensive record in education, and it’s difficult to speculate with any certainty about future rulings. Some sources say that of her 3,000 or more cases over the past 17 years, only a handful (approximately 1 percent) deal with education.

Barry Bull, Professor of Education Policy Studies at Indiana University Bloomington, agrees that it’s all speculation. But, he says, “she does seem to have a record that favors affirmative action and other efforts that deal with issues in minority communities.”

Bull says an issue that might come up again is voluntary desegregation, also referred to as PICS (Parents Involved in Community Schools). These are efforts to provide mandatory busing or incentives to integrate schools, despite the fact that they haven’t been ordered by courts.

In fact, the courts have so far ruled against desegregation, but Bull says Sotomayor might have a different perspective—one that is more welcoming to these efforts. Casey Cobb, Director of the Center for Education Analysis at the University of Connecticut, agrees. “Any future cases that are heard related to PICS might tip the balance toward permitting more race-conscious school choice policies,” Cobb says, “which is probably a good outcome.”

According to Swail, another issue that could come back again is the use of race-based admissions in higher education. He explains that most universities are currently steering clear of race-based admissions as it has been determined unconstitutional. He predicts, though, that if a case were to come up again, “Sotomayor would act legally, but in the end she’s probably going to be a little more liberal than someone else.”

The bottom line? Many education policy and law experts think Sotomayor’s confirmation is unlikely to have any significant effect on education. “I think the next appointment will be critical,” Swail says. “This appointment sets the stage. Bush was able to put on two conservatives—this one pulls one back to the liberals. It becomes a big issue when a left replaces a right, but I’m not sure how that’s going to play out in the next 3 to 7 years.”