How Dangerous is Swine Flu in Children? 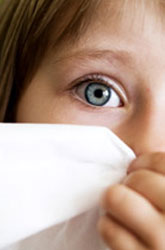 Collect This Article
4.7 based on 3 ratings
by Education.com

This is not your grandfather's flu.

In fact, unlike the flu in past years, the H1N1 virus that reached pandemic status back in April is much less likely to hit your grandparents than your children. That's just one of the many differences between Swine Flu and the normal yearly outbreak of influenza.

In an average flu season, there are 200,000 people hospitalized and 60 percent of those are 65 and older. Newly created estimates released last week for the first time by the Centers for Disease Control and Prevention conclude that an estimated 98,000 people have been hospitalized as a result of the Swine Flu. Fewer than 10 percent of those are 65 and older.

And that brings up another huge difference with Swine Flu. The peak flu season is normally between January and March. But the H1N1 virus has been quite active beginning in the summer. In just six months, ending Oct. 17, CDC officials estimated there have been 22 million cases of flu in the country and 3,900 deaths. And there's still six weeks to go until January, the normal peak of flu activity.

Will the pandemic be more of a problem beginning in January? There's no way to tell, said Dr. Hank Bernstein, a professor of pediatrics at Dartmouth University and member of the Committee on Infectious Diseases for the American Academy of Pediatrics.

But Bernstein and other pediatricians and experts say the early and widespread outbreak, combined with the high numbers of hospitalizations and deaths, mean the Swine Flu should be taken very seriously. "The numbers are startling," Bernstein said. "It's understandably worrisome for families."We want them (parents) to understand the disease is potentially problematic for any child."

Dr. Alanna Levine said she gets the question all the time in her Rockland County practice in New York State about the extent of the dangers of Swine Flu. "I want parents to take home the message not to live in fear, but that you need to be prepared. This is not a disease to be taken lightly."

One reason is that so many more people are at risk from Swine Flu, the doctors said. While seniors are most susceptible to flu in most years, the Swine Flu has targeted younger people. Kids from 6 months to 24 years are especially likely to get the virus.

On top of that, there is a large group of people who fall in the high-risk group because of pre-existing conditions, experts said. That includes pregnant women, infants, people with asthma, diabetes, heart disease, weakened immune systems and neurologic conditions. Bernstein said he believes Swine Flu is so widespread because a much larger than normal portion of the population is vulnerable.

"More people are susceptible, so the attack rate is higher," he said, comparing Swine Flu with seasonal flu outbreaks in previous years. "Instead of 10 to 20 percent of kids at risk, for example, that figure may be closer to 50 percent, Bernstein said.

Both Bernstein and Levine agreed that many kids who get the flu have only a mild disease that isn't that much different than seasonal flu. But there are no guarantees. Bernstein pointed out that a number of healthy children die from season flu every year.

Levine, meanwhile, told the story of an 8-year-old in Texas whose parents recently called their doctor about flu-like symptoms. The child had no pre-existing conditions so the parents were told to monitor the conditions and only call back if the situation didn't improve. Two days later, the mother brought her son in and a flu test confirmed a case of Swine Flu. Four days later, the child died.

About two-thirds of flu deaths involve a child with pre-existing medical conditions like asthma, Levine said. "But I would argue that one-third of the cases involved healthy kids," she said. "This really just reinforces the need to vaccinate."

Bernstein and Levine emphasized the following points for parents to remember for the rest of flu season:

CDC Estimates of 2009 H1N1 Cases and Related Hospitalizations and Deaths from April-October 17, 2009, By Age Group

November 16, 2009
Next Article: What Teachers Need to Know About Swine Flu in the Classroom
We enable strictly necessary cookies to give you the best possible experience on Education.com.Cookie policy