How to Stop Tantrums Before They Start 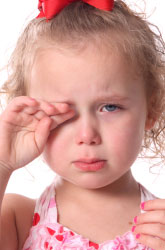 You’ve tried everything. You’ve pleaded, you’ve yelled, you’ve given in, you’ve lectured. But your child seems to constantly fall into “tantrum mode”—kicking, screaming, the works! As a parent, how can you prevent your kid’s tantrums? And why on earth do toddlers and preschoolers constantly have them? Clinical psychologist Dr. Laura Markham spends her life talking to parents about issues like this one through her website, AhaParenting.com. Markham defines tantrums as times when emotions overwhelm reason.

The difference is that when adults get overwhelmed by emotion, the frontal cortex steps in and reminds us to avoid the fight or flight response, as long as the situation isn’t really an emergency. In a young child, however, the frontal cortex isn’t fully developed yet; in fact, it won’t be fully developed until at least age 25. This is normal—although frustrating when your little one decides to have a meltdown in the checkout lane of the supermarket!

Once your child begins a tantrum, there’s not much you can do to stop him. What you can do is work on preventing the tantrums in the first place by helping your child regulate his emotions.

Before you can expect your child to self-regulate, you’ll have to keep your own emotions in check. When a stressful situation arises, take a deep breath and count to ten silently to give yourself time to manage your emotions. By remaining calm, you're subconsciously communicating to your child that the situation isn't an emergency, and doesn't warrant a big reaction. Sometimes, your negative response to a situation can actually trigger your kid’s fight or flight reaction, which sends him into a tantrum.

Is your child hungry? Thirsty? Did he miss a nap or get a short night’s sleep? Has he had enough downtime and enough “do it myself” time carved into your hectic schedule? “When children’s basic needs are met, they will have more inner resources to draw on, and they will be more able to handle emotions,” explains Markham. You can often prevent tantrums with a little bit of foresight.

Although different children develop at different rates—with some four-year-olds still throwing full-fledged fits and others who have grown out of tantrums—you can help to speed things along. Here are some ways you can help develop your child’s frontal cortex:

While it can feel impossible to calm your child down once he's slipped into meltdown mode, you can prevent future tantrums with the tips outlined above. By tempering your own negative reactions and helping your little one work through his emotions, you'll give him the tools he needs to control his temper and react appropriately to any situation.