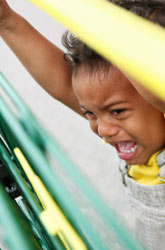 Collect This Article
3.8 based on 4 ratings
by Education.com

All too often, parents of toddlers know how quickly a leisurely trip to the grocery store can end with a full-blown temper tantrum. Just like that, your three-year-old goes from adorable to atrocious: arms flailing, lungs belting, tears streaming and whimpering between ear-piercing wails.

If the situation above sounds familiar, take comfort in the fact that you're not alone; in fact, a 2003 study published in the Journal of Developmental & Behavioral Pediatrics estimated that a whopping 87 percent of children aged 18-24 months throw temper tantrums. Meltdowns can happen anytime, anywhere and for any reason at all. While most tantrums are short-lived—the average time is between two and five minutes—every second can feel like torture.

In addition to being a nuisance in the moment, tantrums offer greater risks down the line. The more a child turns to tantrums, the more he thinks it's okay to scream and react violently when situations don't go his way. From there, it seems fine to disrespect to you and others, which sets a precedent for future disobedience. But is it possible to avoid such behavior? Though it's not always doable, you can learn strategies to prevent and cope with the hysterical tot in the cereal aisle, and ultimately turn the tables on tantrums.

When dealing with a meltdown in the moment, it may seem like you'll never escape the screaming hysterics and flailing limbs. Instead of admitting defeat, however, remember that tantrums are slayable monsters. With persistence and practice of the strategies above, you can be confident that you've found the key to turning the tables on tantrums!