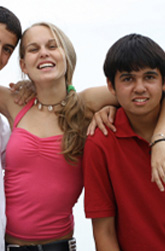 If you’re the parent of a teenager, chances are you’ll face behavioral issues this summer. Teenagers are coming off of a structured school year, knowing just what to expect at any given point during the day or week. Along comes summer, and suddenly all the rules are out the door. What can you do to ensure that your adventurous teen respects the rules this summer?

The bottom line, says Richard Lerner, Director of Institute for Applied Research in Youth Development at Tufts University, is this: You’re the parent, and your rules still apply.

“Ultimately, what kids will appreciate is the consistency and the exercise of rules to guide their life,” Lerner says. “What we often find is that our setting limits is actually a relief to children.”

Setting limits may be a relief on some level, but parents of teenagers know they are bound to run into conflict along the way.

The best way to avoid this, Lerner says, is to enter the summer in a dialogue with your teenager. This discussion should center around the idea that your values as a parent are nonnegotiable, but expectations and concerns are negotiable. Let your teen’s voice be heard, and allow some freedom and flexibility.

Here is a breakdown of some of the biggest issues that parents of teens face over the summer, and how to structure your expectations:

Work or internships over the summer are an important way for teens to experience being responsible. This might be about making money, or it might be about learning the specifics of a particular career path. Either way, Lerner says parents should be direct with their teens about their values and expectations regarding summertime work and internships.

Parents should explain why they feel these experiences are important (for example, to develop a sense of loyalty, teamwork, punctuality, pride in one’s performance, or to give them credentials and qualifications that will help them get into college) and how many hours each week they expect their teens to be involved in this kind of experience.

Another factor to discuss, Lerner says, is the concept of a teen contributing to the family and generating his or her own resources. “Maybe your teen will want to take a spring break vacation next year or go on a ski weekend,” Lerner says. “This is a good way to explain the necessity of the child working to contribute to that expense.”

Reading and academic study over the summer can be a challenge to enforce. Lerner suggests parents be willing to negotiate on this topic. The important thing is for teens to do some amount of reading and academic work to keep their brains active and their learning continuing—the exact amount of time, however, should be up for discussion. Besides, he says, teenagers genuinely need some downtime during the summer, and they need to feel they are exercising their autonomy. Parents will not be successful overall if their teens don’t feel respected to make some decisions about how they spend their time.

Here’s a topic where parents’ values take the forefront. “Most teenagers are going to have sex,” Lerner says, “but you need to be upfront about what your values are so they can do it safely.” Safety, Lerner says, is key. As a parent, you can help your teen avoid situations that might encourage or lead to sexual behaviors (for example, a sleepover with boys and girls), but ultimately your goal is to keep your teen informed about risks and safety measures. Trying to forbid your teen from having sex, Lerner says, could lead to the teens rebelling and practicing unsafe sex.

Sleepovers need to be supervised, according to Lerner. “You need to make sure that other parents are there and they agree with your values,” he says. “You don’t have sleepovers where the parents don’t care if the kids get into the liquor cabinet.” And it’s also important to make sure your values (and the values of your teens’ parents) align with the rules of the community. Some communities have an enforced curfew, for example. “In my community kids have to be home by midnight, no ifs, ands, or buts,” Lerner says.

But also, you need to establish summertime curfews that mesh with your lifestyle. If you don’t want to be up at 2:00 in the morning worrying where your teens are, don’t let them stay out. Lerner says it’s a good idea to negotiate and allow teens to stay out a little later during the summer, but you don’t want to agree to a later curfew that doesn’t work with your value system. It’s also a good idea to discuss the concept of not speeding through the streets at 11:55 to meet a midnight curfew. Talk with your teens about leaving enough time so they don’t have to speed—or that you would rather them be five minutes late than get in an accident on the way home.

Joy rides are a summer staple, but safety is key. No substance abuse and driving. No speeding. No getting in cars with inexperienced drivers. “The major goal of the parent is to keep the kids safe. They need to draw a line in the sand,” Lerner says. “Safety is not negotiable, and there need to be sanctions if the rules are violated.” You might consider a rule that states that your teen is not allowed to drive in cars with more than four friends, or that you get to interview the driver of a car before they leave—embarrassing or not.

Drug and Alcohol Use

Drug and alcohol use are tops on most parents’ list when it comes to concerns for teenagers. This is a legitimate concern any time of year, but summertime often means extended freedom and curfews, and there’s good reason to enter the summer in a dialogue about these issues. Amelia Arria, Director of the Center on Young Adult Health and Development at the University of Maryland, says having open discussions with your teen about drinking and drugs is the most important thing you can do. “Parents need to realize that they have very powerful influences over kids’ behaviors,” Arria says, “regardless of the kids’ ages—and even if they know that their children have already had their first drink.”

According to TimetoTalk.org, a sister site to the Partnership for a Drug-Free America, talking is crucial when it comes to teenage drugs and alcohol use. The site offers the following checklist to ensure you’re staying involved in your teen’s life and keeping the conversations active.

_____ Am I encouraging open dialogue?

_____ Am I discussing the dangers of drugs and alcohol?

_____ Am I monitoring and communicating more?

For more information on talking to teenagers, take a look at Lerner’s book The Good Teen: Rescuing Adolescence from the Myth of the Storm and Stress Years. Or, visit the Information for Parents page at the University of Maryland’s Center on Young Adult Health and Development.

Next Article: Snap! Crackle! Pop! Fireworks and Special Needs Kids
We enable strictly necessary cookies to give you the best possible experience on Education.com.Cookie policy