Log in with different email
For more assistance contact customer service
Parenting and Families
Parenting
Is Santa Real? How to Deal with the Christmas Question

Is Santa Real? How to Deal with the Christmas Question 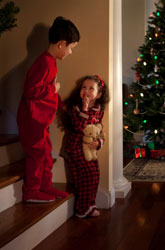 Let's face it: the holidays are a frantic time. There are presents to find, get-togethers to plan, holiday parties, plays and special events at school. In the middle of all of this chaos, your 4-year-old walks up to you, and with a thoughtful look on his face, asks the question you've been dreading: "Is Santa Claus really real?"

The first piece of advice from the experts is to exhale and count to ten. There's no need to panic. But it might be helpful if you've decided in advance how you want to handle the Santa Claus Question.

"People make themselves crazy over Christmas," said Mary Fristad, professor of psychiatry and psychology at The Ohio State University, and a clinical child psychologist.

"Go back to the basics," she urged. "This is about whatever your religious beliefs are and it's supposed to be a sharing, loving and warm and caring time with the people who mean the most to you. (Santa Claus) is just a happy story that kind of floats on top of all of this."

Many parents are adamant about never lying to their children, and that makes the Santa Claus story a more difficult one to embrace. But it really shouldn't be, said Terry Molony, a licensed clinical social worker and school psychologist in Gloucester Township, N.J.

"I don't conceptualize it as lying," Molony said. "I think of it as make-believe. Like when kids see Big Bird on TV. You don't run and point out that it's really a person in a bird costume, do you?"

Fristad and Molony offered some tips for parents to consider when deciding how they want to handle the Santa Claus story in their family.

Some parents worry that learning the news about Santa Claus could cause significant emotional damage. Not so, said Molony and Fristad, at least not that anyone has proven. "I am not aware of any studies that suggest that," Molony said. "I'm not saying none exist, but I'm not aware of any."

So what is the best way to break the news about Santa Claus? Don't worry about it. Your kids will figure that one out on their own. "Let's be realistic," said Fristad. "Have you ever you ever run into a 45-year-old who didn't know about Santa?"

Next Article: Incredible Edible Christmas Decorations
We enable strictly necessary cookies to give you the best possible experience on Education.com.Cookie policy