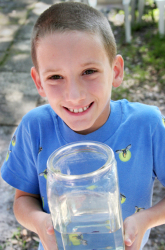 In third grade, science moves out from the wings. Third grade science can be divided into two broad categories: science processes and science concepts. Some science processes include evidence, models, measurement, form and function, and explanation. Science concepts your child will learn this year include simple systems and subsystems; how sound is produced and how it travels; the characteristics, basic needs, and habitats of organisms; and forces that change the earth, such as earthquakes and glaciers.

Curriculum varies from state-to-state, but there are some key concepts commonly studied in third grade. Students working at the standard level at the beginning of third grade:

Students working at the standard level at the end of third grade:

Next Article: What You Don't Know About the FFA
We enable strictly necessary cookies to give you the best possible experience on Education.com.Cookie policy