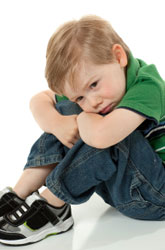 Parents have been saying something along the lines of, "Go to your room!" even before it was common for kids to have rooms of their own—the practice is as old as time. But is isolating a child on "time-out" really a productive form of punishment?

Most parents simply wing it when deciding how—and when—to call time-outs. Often, you tend to do what your own parents did without really unpacking the practice and examining the effects of isolation on you and your child. Confining a child to a room, a chair or a corner has a long history—but no real rule book.

While there aren't strict guidelines, there are some basic principles to keep in mind when using time-outs as discipline. "Time-out [should not be] used as a punitive, hurtful, spiteful reaction," says Dr. Thomas McIntyre, author of the Positive Parenting Practices podcast. "It's used to give the parent and child some time to cool off, re-engage positively afterwards and teach each other how to respond in situations in which the child (and perhaps the parent) responded poorly."

When done properly, time-outs can defuse the situation so that you can move on to more constructive interactions. Try these positive and productive techniques for effective time-outs:

The goal of time-outs, like all forms of discipline, is to reduce negative outbursts and encourage positive behavior, all while supporting your child's emotional growth. "When the parent escorts the child to the time out place, we reduce the emotional distress or support him/her silently during the distress." says Dr. McIntyre. "When the child is calm, we are there to help him/her make sense of the situation."

Isolation is sometimes necessary, but like all forms of control, it should be used sparingly and with patience. Used correctly, time-outs can provide loving support and a learning opportunity for those times when your little one can't control himself.