Tips for Parenting a Competitive Child 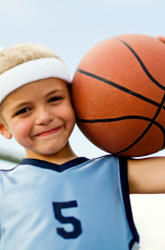 Want to crawl under a rock every time your son publicly proclaims himself the best catcher on his Little League team? Take heart: Childish bragging (while occasionally embarrassing for Mom and Dad) is perfectly normal. But for chronically competitive children, having the ”winning edge” can mean anxiety, peer tension and tantrums over trivial things. These four tips can help you heed off hyper-competitiveness and teach your kids to strive for success in a healthy, positive way.

What proud parent doesn’t want to share his or her child’s accomplishments with the world? But kids are sensitive to their parents’ portrayals of them, and words like “best,” “most” and “highest” don't pass unnoticed. Superlatives like these can cause undue pressure in kids, who may feel that their parents’ love is contingent on meeting such high standards.

Additionally, even seemingly innocuous parenting approaches—“Let’s see who’s the fastest at cleaning her room!”—can foster jealousy and competition between siblings, leading to tension in the home. Your best bet is to celebrate specific things your child does well without pitting her against others. For instance, “You did a great job making eye contact during your audition!” is more effective praise than, “You’re the best singer up there!”

Finally, watch how you talk about your own achievements. If your children hear you gloat about besting a colleague, for example, they learn to do the same.

While it’s nice when parents’ and kids’ goals align, pushing your agenda on a child and living vicariously through her successes is unhealthy for both parties. Give your child some say in her activities, and also in the level at which she chooses to compete. While it’s tempting to measure your parenting by your child’s achievements, don’t do it. Ultimately, your child’s successes and failures belong to your child, not to you. To behave otherwise can strain a parent-child relationship and foster unhealthy competition.

#3: Focus on the Positives

Supported children, children of parents who show unconditional love and encouragement, have little trouble participating in competitive situations because they don’t fear losing. Competitive children, on the other hand, are burdened with anxiety if they suspect for one moment (however untrue it may be) that a parent’s love is merely a condition of their success. Worse yet, they may shy away from activities at which they feel they can’t win rather than jeopardize a parent’s regard for them.

Parents don’t have to avoid talking about failure, though they should be careful to frame it positively. (“I know you feel bad that your team lost, but your hook shot is improving! What could you do differently next time?”) Such language focuses on growth.

#4: Look for the Teaching Moment

Competition is at the heart of news and entertainment. Mudslinging political opponents face off on the nightly news, and television programs in which winning is everything depict fierce fighting amongst singers, dancers and even romantic rivals. But parents can use these moments to teach kids about the downfalls of hyper-competitive behavior: sustaining injuries to top a world record or damaging personal relationships to get ahead. When kids recognize the potential problems of overly aggressive one-upmanship, they learn about the boundaries for healthy competition.

While a little rivalry isn’t necessarily a bad thing, it can become damaging if children begin to see their peers as threats and obstacles or think that a single failure can keep them from being a success in life. As a parent, your own attitude and the way you discuss competition can be the best guarantees of your child’s future success.

Next Article: Scoring an Athletic Scholarship
We enable strictly necessary cookies to give you the best possible experience on Education.com.Cookie policy