Bribery: When to Say Yes 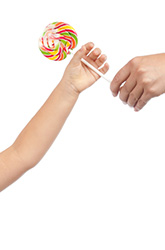 It's rare to find a parent who hasn’t relied on the occasional bribe to extract certain behavior from her kid. But whether you bribe every so often or you make it part of your regular routine, bribing can have specific repercussions. Joshua Klapow, Ph.D., a clinical psychologist for the University of Alabama at Birmingham School of Public health, notes that not all bribery is bad. "'Bribe' has a very negative connotation, but bribing is basically offering a value proposition to do or not do a behavior," he explains. "We bribe people every day—we pay them if they will work. So bribing is in its most neutral sense is what makes the world go around."

Still, just because bribing might be a way of life doesn't mean it's the best method to get your kid to act a certain way. As Klapow puts it, "The question is, what pattern of behavior are you going to establish if you set forth the bribe?" Will that pattern be harmful in the long run? If you bribe your kid to get good grades, will he have trouble motivating himself to succeed when he goes to college? Understanding the effects of bribing your kid will help you judge when it's okay, and when it's better to play it by the book.

To figure out how to approach the idea of bribery, it's important to understand the difference between intrinsic (internal) and extrinsic (external) motivaiton. Just because your kid will follow through on something because he really wants the reward doesn't mean his motivation is coming from within. Intrinsic motivation is motivation that comes from one's own desires, goals, and values, free of other incentives (e.g. a student studying hard because he wants to learn). Extrinsic motivation is motivation that comes from doing something only to receive a reward or to avoid punishment (e.g. a student studying hard because his parents promised to give him money for a good report card).

Hey, we've all been there: a tantrum in the grocery store leaves you red in the face and scrabbling for something, anything that will get your screamer to quiet down. So you offer a treat in exchange for better behavior. And it usually works!  "So many times we use a bribe to get us out of a sticky situation," says Klapow. "We use these bribes because they have powerful short term effects. So the good news is that very often you can use a bribe to change a behavior in the short term."

While bribing your kids can get you some immediate results, it can potentially open a can of worms. Bribery establishes an expectation, warns Klapow, especially in young children who are still figuring out how the world works. The next time you're tempted to bait your child with a new toy, treat, or even money to get the best behavior or grades, consider the drawbacks of teaching your child to rely on rewards.

Think about what kind of incentive system will benefit your little one most in the future: doing something because he'll get a reward, or doing something because it's the right thing to do and/or because it makes him happy? It's not hard to see why the most successful, fulfilled, and resilient people are those who are self-determining, and have a strong internal drive to help them overcome adversity. And let's face it, dangling the carrot can be an escalation game; a new toy car isn't likely to have as much bargaining power with a sixteen-year-old as it would with a six-year-old. So is there a way to find a balance?

The Art of Bribery

Whether you call it negotiation, or flat-out bribing, enticing your child with money, treats, toys, and other rewards is a fallback for even the best of parents. And it's probably okay every once in a while—as long as it's done properly.

Try a more ambiguous "if/then" scenario, where you let your child know that if she completes a task or achieves certain behavior, you'll surprise her with some type of reward later. This makes the reward seem less like payment in exchange for something, and more like a treat to show your appreciation or congratulations for her accomplishment.

Or, try negotiating with your child instead. If you her to work harder in school, first talk to your kid about the reasons why it's a good investment of her time and energy (she can succeed in her career aspirations, have a sense of pride in her achievements, etc.). Help her identify a goal she can keep that she personally wants to achieve. Then ask what she thinks would be a suitable reward for meeting or exceeding expectations. As you talk about the end result together, it becomes a team effort rather than you pulling strings.

"In the end, bribing is a way to change behavior," says Klapow. "Most importantly it sets an expectation and a behavioral pattern. Ultimately, that is what you as a parent have to deal with." As long as the occasional bribe doesn't become your main method of parenting, it may save you some sanity. Just make sure your child understands that bribery isn't your M.O. and you should be fine—at least until the next tantrum.

Next Article: Teaching Your Middle School Student Good Study Habits
We enable strictly necessary cookies to give you the best possible experience on Education.com.Cookie policy