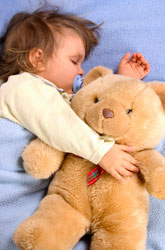 After your little one blows out the candles on her first birthday cake, you don't have a baby anymore—it's time to welcome her to toddlerhood. She's learning to walk, trying new foods, and even testing a few first words. Of course, a complete lack of sleep can definitely put a damper on your excitement.

The good news? Your toddler's old enough to sleep in her own bed and through the night, however resistant she might be. A 2006 study from Pediatrics found that 10 percent of kids are still struggling with sleep at the 12-18 months mark. Addressing common early toddler sleep woes can help you get shuteye so you can actually those toddler firsts.

The older your toddler gets, the more you'll see of her personality every day. Stubborn, funny, charming, silly, shy; they can all add to your little one's sleep issues. By treating your toddler as the individual that she is, you can deal with common sleep problems so you have the energy you need to keep up with her during the day!