Log in with different email
For more assistance contact customer service
Outside the Classroom
Social Networking and Your Child
Is Your Child Spending Too Much Time On Facebook?

Is Your Child Spending Too Much Time On Facebook? 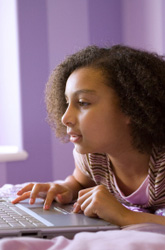 Does it seem like your teen spends every free moment she has on Facebook? She's not alone.

In 2011, Consumer Reports found that 20 million kids actively used Facebook over the last year. Of that, 7.5 million were younger than 13. The social networking site's own rules prohibit users that young.

Beyond that, the consumer research firm Neilsen found that in March 2011, a typical Facebook user was on the site for a staggering 6 hours and 35 minutes at a time.

But is your child spending too much time on Facebook?

Before you can answer that, you need to know where your teen is using the site. Home computers aren't the only point of access, says Monica Vila, founder of The Online Mom. Kids also log on from cell phones, tablet computers and computers at friends' houses — sometimes even at school.

You should also know what your child is using Facebook for, Vila says. Does she hop on to chat with her friends, play games or keep in touch with grandparents? Vila advises talking with your child about what she does on the site and how she decides who to add as a friend.

Your teen may appear to choose Facebook over real life. But Larry Magid, co-director of ConnectSafely.org, says your child's use of Facebook is probably no different from the way you used the telephone when you were a teen. The only difference is the medium.

"There's nothing unusual about teenagers wanting to be social," Magid says. "Facebook is part of their real life." What's changed is the some of the ways in which teens interact with one another.

While teens often log onto Facebook at the expense of doing homework, Vila says the site can also help them in school. This spring, she says, some students at her local high school were chatting on the site about trouble they were having with a class project. A user who was a mutual friend of the students and their teacher alerted the teacher to this fact and the students were able to work through the problem with the teacher.

Plus, social-networking savvy is becoming increasingly important in the work world, especially within the world of business. Learning how to use this technology now will help teens when they start their careers.

The social aspect of Facebook is the most obvious. Magid points out that the nature of the site means teens are, for the most part, connecting with people they know offline. When they're on Facebook, they're figuring out where they fit into the social scene at school and discussing everything from relationships to music to politics.

How Much is Too Much?

There are no firm guidelines about how many hours a teen should be on Facebook. That can change from parent to parent. The real question is whether time on the site is interfering with your child's daily life, and more importantly, is it opening the doors to any harmful or dangerous situations.

Magid uses the comparison of adults who use alcohol too heavily. "It's one thing to have a drink or two and go about your life," he says. "It's another if you live for drinking." Not only can too much Facebook time get in the way of your child having an active, healthy life and home and at school, but it could also lead to misuse of the site, which could cause bigger problems down the road.

Vila says your observations can tell you if your teen uses Facebook too much. Ask yourself these questions:

These are just some of the things you should consider when looking for clues about the overuse of Facebook. But what can you do to help your child cut back on Facebook time?

Since Facebook is so important to teens' (and even many adults') social lives, Magid doesn't recommend cutting your child off from it entirely.

But there's no problem with limiting it. Vila suggests requiring your child to finish her homework before using the site and specifying how long she's allowed on Facebook on weekends and school nights. Whether she likes it or not, it's your right as a parent to encourage and enforce good rules surrounding good behavior.

Watch your own example, too. If you warn your teen to use good judgment about the pictures she posts online, Vila says, avoid posting photos of yourself in a provocative Halloween costume or drunk at an office party. If you tell your child she doesn't need to post something everything she does throughout the day, then you shouldn't be doing it either. Follow your own advice and your child will be more likely to follow it too. This is the case for most things with children, whether it's Facebook, eating healthy, talking back, or TV time.

She adds that many kids who spend too much time on Facebook could simply just use something else to do. Tap into your child's interests and find an activity she'll enjoy. Does your child love TV shows about celebrity chefs? Find a cooking class. Do you have a teen who enjoys music? Get tickets to the musical being performed at the local theater. Does she love basketball? Go to a local park and shoot a few hoops with her!

Magid says underlying issues like stress, depression, low self-esteem, or even loneliness (to name a few) often lead kids to spend excessive time on Facebook. If you think this might be the case, talk to your child about what is going on in her life. She might be using Facebook to procrastinate on difficult homework or avoid connecting with peers she's uncomfortable around offline or to find an escape from frustrations she might be having. If she's using Facebook as a crutch for something, she's misusing Facebook. The most important thing you can do, as with most things, is to talk and listen to your child.

If you can't tackle this problem on your own, he says, enlist a professional like your child's school counselor or a therapist. Facebook should be part of your child's life – not the focus of it.