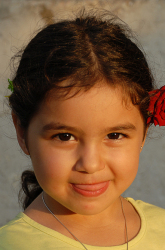 Spain has a rightful reputation for beach lounging, wine tasting, and running with the bulls, but most Spanish cities also offer fun family-oriented experiences. You just have to know where to look. Here's a peek at a few great spots:

Along the northern Mediterranean, our first stop is Barcelona. There are a ton of family-centered outings available in this cosmopolitan city, but L’Aquàrium is one of the best. The aquarium’s centerpiece is a clear tunnel with a moving pathway transporting mesmerized kids and adults through a water-world full of zipping sharks and gliding sting rays. Families can follow a self-guided tour in four languages to twenty thematic tanks. Some tanks feature local environments and species, such as The Ebro Delta tank with its sea and river eels. There's also a popular seahorse tank; challenge your child to spot these highly camouflaged creatures. L’Aquàrium is packed with plenty of hands-on educational stations throughout. Entrance is €15.00.

Taking off from Barcelona to the south along the Mediterranean, we stop in Spain’s science capital: Valencia. Besides being a beachy Mediterranean gem, Valencia is also home to The City of Arts and Sciences, an educational wonderland that will dazzle children and adults alike. Designed by architect Santiago Calatrava, many visitors come to The City of Arts and Sciences just to admire the innovative buildings from the outside. Of course, it’s even better to go in! Start with L’Hemisferic, a gleaming architectural creation resembling a giant floating eye. Inside the eye there’s a planetarium and an IMAX theater with shows ranging from astronomy to biology. Alongside L’Hemisferic is the centerpiece of The City of Arts and Sciences; El Museo de las Ciencias Príncipe Felipe. The museum is focused on learning about science through tactile experiences, which has made it a favorite with children. Every week the museum features a new scientific topic ranging from the complexities of our DNA to more simple matters like ‘Why Boats Float’. Entrance to both the Museo de las Ciencias Príncipe Felipe and L’Hemisfericis is €7.00.

We finish in Spain's capital city, Madrid. It's worth a trip to the Prado, a museum and art gallery that houses one of the finest collections of European art in the world. However, be prepared for long lines and hushed atmosphere. After museums in the morning, a trip over to Santiago Bernabéu Stadium is a fun way to let off some steam and learn about Spain’s most important pastime: el fútbol. Bernabéu is the Real Madrid soccer team’s stadium, which is one of the best teams in Spain and one of the largest stadiums in Europe. Touring Bernabéu takes curious fans through a golden trophy museum with interactive information about the legendary team and plenty of photo-opts. The team’s former uniforms from the early 1900s are on display in the museum, along with some of the first soccer balls used by Real Madrid. It’s interesting to see how much the shoes and professional soccer balls have changed in 100 years. Visitors also get a chance to sit in the player’s field-side seats and check out these super-star athletes’ on-site fitness center. A trip to Bernabéu takes about three hours and tickets are about €7.00 each. The stadium can be reached from central Madrid easily by public transportation.

So, when scheduling family vacations, don't limit yourself to theme parks—there's lessons to be learned and fun to be had in sunny Spain.