Tune into Black History with 80 Years of Musical Monarchs 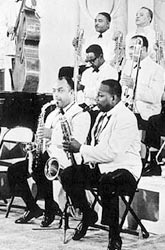 All too often, history is a study of names and dates. But African-Americans have made such a rich and colorful mark on all facets of life that to merely read about their accomplishments in a textbook wouldn’t do them justice. This Black History Month, take the time with your child to listen your way through 80 years of African-American musical royalty. By no means exhaustive, this list of African-American musicians runs the gamut from the King of Ragtime to the King of Pop and includes musical “royalty” that spans generations and genres.

Though his career may have been brief, his influence wasn’t—the syncopated rhythms of the King of Ragtime permeated jazz music for decades to come. Joplin rose from the obscurity of seedy cafes to become prominent as a musician with his first hit, “Maple Leaf Rag,” in 1899. Though he died penniless and nearly forgotten, he was honored posthumously with a Pulitzer Prize for his talents.

Bessie Smith, Empress of the Blues

A big influence on the jazz movement of the early 20th century, Bessie Smith proved to be one of the most popular vocalists of her time. In the 1920s she was the top-paid African-American performer in America, and although the popularity of her bluesy style waned in the 1930s and the Great Depression made sales difficult, Smith continued to perform until her death in 1937.

Born Edward Kennedy Ellington, “Duke” became an important figurehead in the Harlem Renaissance of the 1920s and by the latter part of that decade was headlining as the house band at Harlem’s Cotton Club. His band released its most famous tunes during the 1930s and 1940s, but Ellington continued to record into the 1960s. When he died in 1974, his last words were allegedly, “Music is how I live, why I live and how I will be remembered.”

Nathaniel Adams Coles began performing in the 1930s, when he picked up the moniker “King”—by 1937, he had formed the Nat King Cole Trio, a jazz group unique in that it lacked percussion. In the 1950s Cole made the transition from jazz to the R&B sound he is perhaps best known for. In 1951 he recorded “Unforgettable”; in 1991, his daughter Natalie Cole recorded an overdub duet with her father of the same song that charted nearly as high as the original.

The first woman inducted into the Rock and Roll Hall of Fame, the undeniable Queen of Soul has been racking up accolades since she began singing gospel in the 1950s. Her music, characterized by the passion and soul she is famous for, sold well through the 1960s, and though she experienced a lull in the 1970s with the rise of disco, she came back in a big way in the 1980s and 1990s. Most recently, she was the featured vocal performer at the historic inauguration of President Barack Obama.

By the time of Hendrix’s untimely death in 1970, he was already a rock legend. He began recording in the mid-60s and found commercial success with hits like “Hey Joe,” “Purple Haze” and “The Wind Cries Mary”. His characteristic sound is best exemplified by what is called the “Hendrix chord” (the dominant 7#9 chord) among guitarists. There’s a certain unmatched rawness attached to Hendrix especially apparent in his “Star Spangled Banner” improv at Woodstock in 1969.

The little boy who wowed the world as the youngest member of the Jackson 5 went solo to great acclaim in the 1970s. His 1982 Thriller still stands as the best-selling album in U.S. history—but Jackson proved he was even bigger than that. A gifted performer, he elevated pop music to a new level with his charisma and signature dance moves. Though dogged by financial, legal and personal problems through the latter part of his career, Jackson never stopped performing; his legacy is evident in the 31.1 million people who watched his televised 2009 memorial.

This list barely skims the surface of what African-American performers have contributed to music. Do some exploring of your own and discover a rich musical tradition that transcends racial barriers.

Next Article: Four Life Lessons from the Civil Rights Movement
We enable strictly necessary cookies to give you the best possible experience on Education.com.Cookie policy