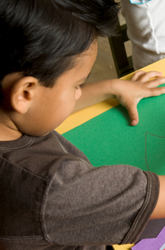 Universal pre-kindergarten, the idea that all children should have access to a preschool program, has been building of a lot of steam lately. The presidential candidates have talked about the need to better prepare children for kindergarten, and prominent advocacy groups have been pushing states to implement such programs. As it stands right now, more than 40 states, plus the District of Colombia, offer pre-k programs, largely for 4-year-olds. Those few states that don't provide pre-kindergarten are being labeled “wilderness states.”

However, as W. Steven Barnett, Director of the National Institute for Early Education Research (NIEER) points out, the key words are "high quality." This isn't about your average daycare or low-budget preschool. According to NIEER, a good preschool program is one which "teach[es] children the skills they need to learn to read, do math, make progress in science and other areas as well as begin to understand the world and how it works." And, that's not all; high quality programs are also supposed to help children develop emotionally and socially, both important components of being ready to learn. Barnett notes that "We [state and federal governments] now subsidize programs that don't really make things better. It's the worst of both worlds."

Oklahoma, one of several states which have made pre-k programs freely available to all 4-year-olds on a voluntary basis, is often held up as an example of what a positive outcome the program can have. There, children from across the socio-economic spectrum experienced significant gains in letter-word identification, spelling, and applied problems test scores after participating in the pre-k program.

So why are some groups opposing the program or reluctant to release funds for it? For one, someone has to pay for it, and the cost is steep. NIEER found that the cost of making high-quality preschool available to all of the nation's 4-year-olds would ring in at a whopping $33.8 billion. To make it available to 3- and 4-year-olds, as some advocates are pushing for, carries a bill of close to $70 billion.

Right now the majority of upper and middle-class families already pay for their children to attend pre-k, but the kids who have the most to gain are from families that can't afford to pay. This is why many lawmakers feel that universal pre-k is simply a way of making the public pay for what is largely paid for by private individuals. To them, programs such as Head Start, which specifically target low-income families, are more economically palatable.

Also, the question of “how early does a young child need to be in school anyway?” hovers. For active, fidgety 3- and 4-year-olds, is school really the best place to be? As Barnett points out, "It wasn't that long ago that very few children were in any kind of classroom before age five. Today, most children are in a classroom before five.

Regardless of whether pre-k is right for your child, the option will most likely be coming to your town soon, if it's not there already.

For more information on universal pre-k, check out the National Institute for Early Education Research