Unraveling the Mystery of the Allergy Epidemic 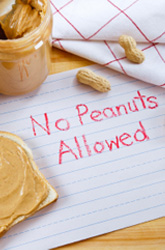 Just a generation or two ago, food allergies were rare. Today, it seems like several kids in every class have some sort of food allergy. Is there really some sort of allergy epidemic? If so, what is causing so many kids to develop food allergies? The answer may be more complicated than you’d think. “This is an important topic,” says Dr. Susan Rudders, assistant professor of pediatrics in the division of allergy and immunology at Brown University. “But it’s not one that the scientific community has definitive answers to right now.”

Which aspect of our lifestyle has caused this change? Here are a few possibilities that researchers are currently exploring.

Perhaps the most well-known guess at the cause of the allergy epidemic blames Western society’s emphasis on cleanliness. In a world of antibacterial wipes and liquid hand sanitizers, children are exposed to far fewer germs than they were in the past. While we may be protecting our children from disease-causing germs, we may also be preventing their immune systems from struggling with these germs from a young age, therefore stunting their immune system’s growth.

In addition, we may be limiting the number of good bacteria that our children are exposed to, especially those that are usually present in gastrointestinal flora. This is especially true in babies who were born by c-section, who have been shown to have less healthy flora than babies who were born vaginally. Some experts have suggested that probiotic treatment, which adds some of these “good bacteria” into the intestinal tract, may help in the treatment or prevention of food allergies. This hypothesis, as well as the hygiene hypothesis as a whole, is still being examined by researchers.

According to this hypothesis, humans used to live surrounded by nature and by certain organisms in the environment. In fact, our bodies were so bombarded by these organisms that our immune systems developed accordingly. Now we hardly ever exposed to these organisms, due to changes like improved public sanitation, a cleaner supply of water, increased use of antibiotics, and higher rates of immunization. Therefore, our bodies react adversely to these substances – as well as other substances – in the environment when we do encounter them. Increased allergic reactions may be one symptom this change.

Over the past century, experts are continually changing their recommendations to parents about when to begin introducing solid foods. In the 1920s, parents were told to wait until infants were a year old; in the 1950s, they reversed direction and instructed parents to introduce solids much earlier, at about 3 months. In the 1980s, they began to suggest that parents wait until four to six months of age, and in the late 1990s, they finally recommended that parents hold off on solids until their children were six months old.

Some experts believe that these changes may have affected the increase in food allergies over the years. In addition to these changes, experts have also begun to change their stances on when highly allergenic foods should be introduced. Earlier research studies seemed to indicate that delaying the introduction of highly allergenic foods was ideal, and the American Academy of Pediatrics (AAP) wrote their recommendations accordingly.

More recent research, however, seems to indicate that waiting to introduce these foods can actually increase the likelihood of a child developing an allergy to them. For example, one study compared British children, whose parents were told to hold off on introducing peanuts, with Israeli children, who often eat a peanut-based snack as one of their first solid foods. The results showed that the Israeli children were far less likely to develop a peanut allergy than their British counterparts. Other studies examined egg and milk allergies and produced similar results. These studies, however, were not as controlled as researchers would like, so additional research is focusing on whether early introduction of highly allergenic foods can actually lower the risk of food allergies, rather than raise it.

Another change that experts tentatively link to the food allergy epidemic is vitamin D deficiency. With so much time spent inside, especially in first-world countries, levels of vitamin D are plummeting. As with the other theories, experts aren’t sure whether this could be causing the allergy epidemic. What they do know is that places that are distant from the equator have higher rates of food allergies, and that babies born in the autumn and winter, when vitamin D levels are lowest, have a higher risk of developing food allergies. Is there a causative link? Researchers are trying to find out.

So with so much that we don’t know about food allergies, what should parents do?

Early or late introduction of solids? Probiotic supplementation? Avoidance of antibacterial soap? Here are the current recommendations from COFAR (the Consortium of Food Allergy Research). Keep in mind that these recommendations may change any day!