Four Ways to Celebrate Shakespeare with Your Child 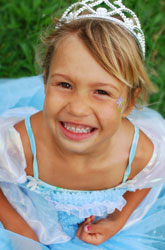 “To be, or not to be.” For many parents, William Shakespeare can be distilled into a series of sound bites and memories of high school teachers droning on in what then seemed like another language. What was it that made us so bored by the Bard?

Maybe, suggest some educators, we just weren’t introduced to him early enough.

Lucretia M. Anderson, the Folger Shakespeare Library’s Elementary School Program Coordinator, points out that Shakespeare can be magical for young learners, who are “eager to try something new and...less inhibited and more willing to take risks.” Better yet, elementary students who are just beginning language acquisition and vocabulary skills won’t fear Shakespeare’s unfamiliar words, and aren’t coming at him with the cultural stigma of “high art” clouding their appreciation. This April marks both National Poetry Month and the anniversary of Shakespeare’s birth and death day on April 23rd. In honor of both, here are four ways to unlock the world of the so-called “sweet swan of Avon” for your elementary-aged child.

“We know what we are”: Build on What Kids Already Know

Titus Andronicus would be a stretch for your six-year-old, but it’s not that big a leap from Tinker Bell and Pixie Hollow to A Midsummer Night’s Dream’s Titania and her fairy bower. Likewise, Macbeth’s three witches chanting around the cauldron or the magician Prospero in The Tempest may resonate with children who grew up on Harry Potter.

Kids may also recognize the Bard in movie adaptations geared toward their age groups: She’s the Man, for example, sets Shakespeare’s gender-bending Twelfth Night in a high school, The Lion King borrows heavily from Hamlet, and the recent Gnomeo and Juliet casts the star-crossed lovers as animated garden gnomes. “Shakespeare is for everybody,” reminds the Folger Shakespeare Library’s website, “and that includes elementary school students!”

Just playing around with Shakespeare’s words makes him more accessible to even the youngest children. Ancient grudge breaking to new mutiny in your household? A light-hearted Shakespearean insult-fest is bound to instigate giggles instead of griping. Lists of Shakespeare’s best zingers are plentiful online—give your kiddos three columns of Shakespearean words and let them have at it, going back and forth to invent and trade goofy one-liners like “Thou spongy, elf-skinned bugbear!” and “Thou mewling, toad-spotted malt-worm!” Better yet, turn the tables and find a list of Shakespeare’s compliments online and exchange sweet nothings—what child wouldn’t chuckle at being affectionately referred to as “Thou sweet, tiger-booted pigeon-egg”?

Even the sound and cadence of the language is enough to foster appreciation for the man who added some 500 new words and phrases to the English language. The Folger Shakespeare Library suggests having kids create their own stories from some of these Shakespearean coinages—phrases like “vanish into thin air” and “as luck would have it” are so much a part of everyday usage that kids may be surprised to discover they’re actually 400-year-old literary remnants of the renowned playwright.

“If music be the food of love, play on!”: Shakespeare in Music and Art

Another good way to introduce kids to Shakespeare is through art celebrating his plays and poems. John Everett Millais’ The Death of Ophelia or Arthur Rackham’s Puck are both iconic images that can help kids recognize thematic elements of Shakespeare without necessarily having to understand all of the language. The soon-to-be-released Shakespeare’s Art by Jeff A. Menges (Dover, coming mid-April 2011) has over 130 artistic representations of Shakespeare’s works, and Folger-endorsed author Bruce Coville (various publishers) has produced a dramatically-illustrated series of Shakespearean retellings for kids.

Shakespeare’s plays themselves are rife with songs and music, providing yet another way to welcome kids to his world. Let your elementary-age children stomp out the iambic pentameter in the witches’ spell from Macbeth or hear original period instrumentation of Shakespeare’s songs on Michael Mikulin’s Shakesongs website (www.shakesongs.com). Broadway adaptations like Kiss Me, Kate (based on The Taming of the Shrew) or orchestral suites like Mendelssohn’s A Midsummer Night’s Dream help even the youngest children recognize the mood of the plays.

“All the world’s a stage”: Shakespeare Through Performance

Naturally, the best way to approach Shakespeare is the way his audiences did 400 years ago: through performance. Many cities offer Shakespeare festivals, and outdoor presentations make Shakespeare especially doable for young children. The Shakespeare Fellowship (www.shakespearefellowship.org) gives a fairly comprehensive list of Shakespearean productions spanning the globe. For parents who can’t get out with their kids to see live Shakespeare, the BBC offers their 4-disc Emmy Award-winning BBC Shakespeare Animated Tales, which condenses the Bard into 30-minute, kid-friendly adaptations.

You can also have your children act out their own scenes: the Folger Shakespeare Library’s website has abbreviated versions of the Bard’s best plays that can be easily adapted for younger actors. It’s important, notes Folger Elementary School Program Coordinator Lucretia M. Anderson, to choose a resource that doesn’t water down Shakespeare’s language too much: “We want them [kids] to become engaged with the beauty of the language, as opposed to using paraphrased versions...children do get it.”

“Not of an age, but for all time”: Shakespeare for Everyone

Still think your kid is too young for Shakespeare? Not so, says Anderson: “We are definitely advocates of introducing Shakespeare to elementary students. We believe this allows students the opportunity to unlock the language and have the ability to really enjoy Shakespeare in their secondary school years and beyond!”

Next Article: Motivating Children to Become Lifelong Readers
We enable strictly necessary cookies to give you the best possible experience on Education.com.Cookie policy