What Are Common Core Standards? 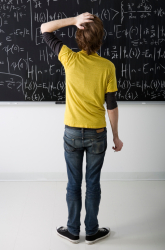 You may have heard the buzz about Common Core State Standards. If you’re in one of the 45 states that have adopted them, you may have already seen changes in your child’s curriculum. Only Alaska, Nebraska, Texas and Virginia have declined to adopt the standards (and Minnesota adopted the language arts standards but not math). If you’re confused as to what they’re all about, read this basic breakdown:

Development of Common Core State Standards was sponsored by the National Governors’ Association and built on decades of work at the state and national levels. There are two sets of standards, one for language arts and one for math, both introduced in 2010. At the core of each set of standards is a short list of “anchor standards” that clearly state what a student needs in order to be ready for college and career. The anchor standards are backed up with detailed charts that show what each standard looks like at each grade, from kindergarten to 12th. The grade-level standards show three important things:

In language arts and math, Common Core State Standards place a consistent focus on fostering your child’s ability to use his knowledge to do something meaningful. Memorization is not enough. Students need to be able to apply what they know to problems and projects. Rob Cohen, who teaches middle school in New Jersey, says the language arts common core “is after greater sophistication and complexity and nuance when it comes to understanding that an argument may not be about the facts as they exist or which ones to use, but what action we might take as a result of that information.” In mathematics, the skills students need to master evolve over time from basic concepts about numbers to more complex concepts about algebra and geometry, but the practices remain the same:

From the first grader using colorful attribute blocks to demonstrate the many ways that a rice cracker can be shared, to the 10th grader explaining the calculations she did to build a model house to scale, youngsters are shown that their thinking is what matters most.

Common Core State Standards are student-centered. The grand purpose of the standards is to engage students in learning that still matters when they graduate from high school and go on to college or a career. The anchor standards take up only a few pages and are made to be easy to grasp, so parents and teachers can consciously work toward achieving them. The standards for language arts are divided into four sections: reading, writing, speaking and listening, and language. Here’s a sample of them, from the speaking and listening section:

Standards for Speaking and Listening—Comprehension and Collaboration

Standards for Speaking and Listening—Presentation of Knowledge and Ideas

People have worked for years to create a standardized plan for education, but many efforts resulted in long, detailed lists of facts and skills that rapidly went out of date. The educators and parents who worked on the Common Core State Standards recognized that they would have to do things differently to have the positive impact they wanted on how teachers teach and students learn. They let go of their favorite facts and skills to reach a consensus on a limited number of key concepts for getting students ready for college and careers. Adoption of the CCSS by 45 states means that parents across the nation can partner with teachers and be on the same page as they guide and monitor each child’s progress.

Next Article: Benefits of Failure: Why Making Mistakes in School Is a Must
We enable strictly necessary cookies to give you the best possible experience on Education.com.Cookie policy