Log in with different email
For more assistance contact customer service
Parenting and Families
What Not to Say to Your Kids: 9 No-Nos

What Not to Say to Your Kids: 9 No-Nos 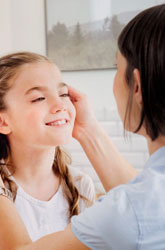 As a parent, it's impossible to keep your cool 24/7. There's only so much whining and tantrums a person can take before she snaps—even Supermom loses her temper from time to time!

When your kid's very young, your words aren't as important as your actions—but as your child ages, what you say has a huge effect on his self-esteem. Words can't be deleted like a bad comment on Facebook, so it pays to speak carefully. Child experts reveal what not to say to your kids, even when things get heated.

"I hope you don't end up like..." Focusing on what you don't want your child to become can be as detrimental as insulting him. "We get whatever we focus on, and whatever we focus on expands," says clinical psychologist Nancy Irwin. "If you suggest to kids that they are shy, fat, slow, just like their father ... it will become a self-fulfilling prophecy."

"You can't..." While you might preach realism as a parent, telling your little one that he simply can't do something that he's attempting is crippling. "Children revere what their parents think of them," says Tammy Gold, a parenting coach. "A simple insult could crush the self-esteem of a child."

"Never." Family psychologist Edie Raether takes a hard line against negative parenting. "Never say never! That is the most important rule, as we all need to dwell in possibilities."

"I'm gonna kill you!" OK, we've all had that moment where terrible words have slipped out. But using violent threats—kidding or otherwise—is never okay, according to school social worker Devra Gordon Renner.

"You are the reason why..." Unless you're going to finish that sentence with a positive statement, don't start it at all. Don't play the blame game. "These types of comments destroy a child's sense of unconditional love, place unfair and inappropriate blame on the child for adult issues, create insecurity and destroy self-confidence," warns child psychiatrist Tia Horner.

"Stop acting like a baby." When your 5-year-old goes into tantrum-mode at the grocery store, it's tempting to throw his yearning to be a "big boy" in his face in an effort to make him stop. Ridiculing or shaming him into better behavior isn't okay.

"I wish you were more like your brother." "The comment I have heard most frequently that seems to haunt adults from childhood is a reference to not being wanted," reveals Julie Gurner, a clinical psychologist who specializes in adult psychopathology.

"I'm disappointed in you." Hearing these words can be absolutely devastating to the fragile confidence of a child. Children want nothing more than the approval of their parents or the acknowledgment of a job well done.

"You're a bad boy!" When your little one acts out, this label can tumble out of your mouth without you even realizing it. "Their behavior might be bad, or the choice they made was bad, but your child is not bad. You need to understand the difference, and so does your child," warns marriage and family therapist Lori Freson. "I can guarantee you is that if your child believes he is actually bad, his behavior will be even worse."

Look, there's no perfect parent in the entire world who doesn't lose her cool every now and again. And while it's totally fine to feel annoyed, angry, tired, disappointed or upset with your child, the important thing is that you know what not to say to your kids. Of course, even if you do make a mistake, an apology and a hug go a long way in making sure your child feels loved and supported.