What Your Teen Really Thinks of You 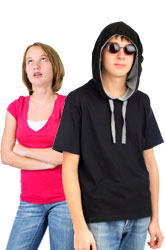 Picture yourself in the mind of your teen. How would you respond if you were asked the following questions?

Do you assume that your teen would answer no to all three? Most parents would, but research proves otherwise. What the parent my see as a frustrating or conflicted relationship, their teen may see as an overall positive relationship with minor setbacks.

This surprising research was conducted by ChildTrends, a private non-profit agency created to monitor the well-being of children and share their findings with policy-makers, foundations and government officials who effect change. The agency aims to provide accurate information about children’s needs, according to Dr. Kristin Moore, a Senior Scholar at ChildTrends who was one of the leading researchers.

After looking a very large number of government surveys given to parents and adults, the agency analyzed the responses. They found that a large number of teens actually held positive views of their relationship with their parents. “There is a lot of research out there that’s not very trustworthy,” explains Moore.

According to Moore, these numbers mean that “relative to America’s perceptions as to how adolescents and parents get along, they actually have pretty good relationships and communicate well.”

Recent data on how adults view adolescents reveals many negative perceptions, in regards to familial relationships. Even if they feel close to their own teens, they often assume that their situation is the exception to the rule.

The media in particular has espoused the idea that teens hate their parents. Movies and TV shows paint teens as hormonal hermits who only care about their peers, come home from school, go to their rooms, and slam their doors to keep their parents out. Many parents themselves are skeptical about how much their teens look up to them. After all, adolescence is a time of self-discovery and rebellion.

This analysis, however, might underestimate the affections teens truly have for their family members. Overall, the majority of teenagers respect their parents, enjoy spending time with them, and even hope to be like them someday.

There are some caveats to this research, however. Older teens are less likely to say that they communicate well with their parents, and children raised by single parents are less likely to report feeling close to that parent, which is perhaps only logical.

So what does this research mean to you? What can you do to make sure that your relationship with your teen is something to be proud of, at least in your teen’s eyes?

Moore emphasizes an emotionally supportive relationship, starting from childhood. “Parents who have the best relationships with their teens are authoritative. Not just firm, not just loving, but both.” This means creating an environment that shows respect and care for your child, while laying down boundaries when necessary.

And most importantly, remember that even when your teenager shouts “I hate you!” or chooses to spend time with her friends instead of with you, odds are that your views of the situation are probably very different. While you may see a teen who wants to stay as far away from you as possible, your teen may see two loving parents who are good enough to emulate…but whom he just doesn’t want to hang out with right now.