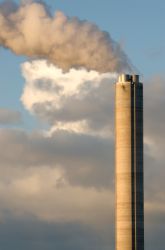 Readily available or can be easily purchased at a grocery store.

One day to collect data; another day to write results and prepare the science fair display.

All rain has some acid. However, in places where large amounts of smoke are released into the air, gases such as sulfur dioxide and nitrogen dioxide are released from smoke into the air. In the air, these acidic gases become water droplets that make up clouds. Then these acids are released in the form of rain back to the earth. Acid rain harms the environment by killing seeds and eggs of many plants and animals. It also wears away rocks.

In this project, the affect of acid rain is simulated by the acid, vinegar. Chalk is a soft rock made from limestone. This investigation will show in a short time what acid rain can do to rocks over a long period of time.

acid: a chemical substance that can cause erosion

acid rain: rain that contains a significant amount of acid usually in the form of sulfur dioxide and nitrogen dioxide from smoke in the environment

erosion: the process by which the surface of the earth is worn away by the natural actions of wind or water

Vinegar is an acid. Chalk is made from a soft rock called limestone. Gases from smoke are released into the air. In the air, the acidic gases become water droplets which return to the earth as rain.

“Weathering and Erosion” by Phil Medina at www.mrsciguy@optonline.net

“How Acid Rain Works” by Sarah Dowdey at http://science.howstuffworks.com/acid-rain.htm

Why Does It Rain?
Worksheet
Why Does It Rain?
Without rain, we wouldn't have any puddles to splash and stomp in. Does your third grader know why and how rain falls from the clouds?
3rd grade
Science
Worksheet
Making Rain
Activity
Making Rain
...“Rain, rain, go away”… but not yet!...
kindergarten
Science
Activity
Make Your Own Fizzy Lemonade
Science project
Make Your Own Fizzy Lemonade
This science fair experiment idea's objective is to understand the general concept of an acid and a base.
3rd grade
Science project
Spanish Vocabulary Grab Bag
Worksheet
Spanish Vocabulary Grab Bag
What do a beach ball and rain and an eagle have in common? Nothing, except that they're on this Spanish vocabulary worksheet.
4th grade
Worksheet
Raining Gumballs
Worksheet
Raining Gumballs
What would you do if you were caught in a rainstorm made of gumballs? Bring out your creativity with this wacky writing prompt.
3rd grade
Reading & Writing
Worksheet
Bleeding Paper
Science project
Bleeding Paper
..., acid compound, basic compounds...
3rd grade
Science project
Bar Graphing with Eggs
Game
Bar Graphing with Eggs
It's raining eggs! Kids must move quickly to catch eggs for Farmer Brown, organizing and displaying the data using bar graphs in this silly game.
3rd grade
Math
Game
Bust That Rust!
Science project
Bust That Rust!
...  This is one of the reasons that acid rain caused by pollution is so harmful. In these experiments, students use steel wood pads to explore how rust occurs....
High school
Science project
Homemade Cleaners: Getting Squeaky Clean
Science project
Homemade Cleaners: Getting Squeaky Clean
...The chemicals in those cleaners, specifically the vinegar and lemon juice, had a lot of acid in them. Acid has a "buddy" called alkaline....
3rd grade
Science project
Floods and Droughts and Water, Oh My!
Lesson plan
Floods and Droughts and Water, Oh My!
...Explain the difference between a drought, or a lack of rain, and a flood, or an overabundance of rain....
3rd grade
Reading & Writing
Lesson plan
Wetlands and Swamps
Worksheet
Wetlands and Swamps
...wetlands and swamps, water cycles, wetlands, swamps, water, cycles, rain, surface...
3rd grade
Science
Worksheet
Learn Chinese: Weather Words
Worksheet
Learn Chinese: Weather Words
...In Learn Chinese: Weather Words, students review the characters and Pinyin forms of the words for fog, rainbow, snow, rain, sun, lightning, wind, thunder, and cloud &...
preschool
Worksheet
We enable strictly necessary cookies to give you the best possible experience on Education.com.Cookie policy