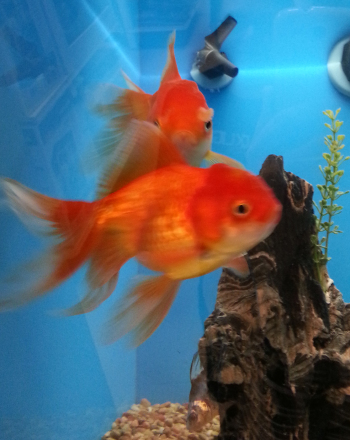 Breathe in, breathe out: all right, are you ready? In this experiment, you’ll see whether people or fish breathe more quickly, and if size affects breathing rate.

Who has the higher breathing rate – fish or humans?

Oxygen is lovely stuff. It’s what people and other animals need to breathe. We need it in order for our cells to do what’s called aerobic respiration, to create energy to stay alive.

Humans breathe through our noses and our mouths. Humans are mammals, and the breath that we take makes its way to our mammal lungs. These lungs are adapted to take oxygen from the air. Tiny air sacs move this oxygen into our bodies.

A fish breathes oxygen as well, but if you take a fish out of water, it will die. This is because its body is used to breathing through gills.  When a fish breathes, water moves into its mouth and past feathery gills that are full of blood vessels. As water passes over the gills, the oxygen that’s dissolved in the water moves into the fish’s blood and makes its way into its cells.

Water is made out of hydrogen and oxygen, so at first it seems like water has a lot of oxygen in it. However, fish aren’t breathing in that oxygen. They breathe the dissolved oxygen in the water – the oxygen that moves into the water as it tumbles over rocks, for example. Air has around twenty times more oxygen than water does, and water is also heavier than air, so it’s harder to move into the fish’s gills. Since there’s less oxygen in the water and the water is harder to move around, fish need to breathe more quickly.

Many different factors change the amount of oxygen that an animal uses. One is an animal’s thermostat. Some animals have an internal thermostat: they make their own heat, and they use oxygen in this process. Others have a body temperature that changes according to the animal’s environment. Fish are usually ectothermic, which means that their body temperature can change depending on changes in their environment. Animals that are ectothermic don’t need to heat their bodies using a process that involves oxygen. This means that they need to breathe less. How often do you think a fish would breathe if it also needed oxygen to keep itself warm?