Diffusion, Membranes, and Cryogenics: Can We Freeze Cells? 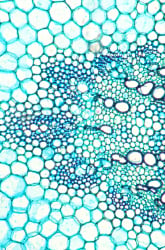 In this 2-part project on diffusion and cryogenics, I was trying to find out what would pass through membranes. I observed that glucose diffused through a membrane but starch did not. I then used the experience from this investigation to observe what effect salt would have on the preservation of cells. By using salt to allow water to diffuse from a cell, there would be less water in the cell when it expanded upon freezing and thus less damage done to the cell. I thus hypothesized that the greater the salt concentration, the less cell damage done.

I cut a beet into identical weight sections (14 g), and placed then in jars with varying salt concentrations: 0%, 10%, 20%, 30%, 40%, and 50%. I set up 3 sets of these, and placed 1 set in a freezer, 1 set in the refrigerator, and the final set at room temperature. After 24 hours I measured cell damage by measuring the concentration of beet pigment in the water; the rupturing of cells would release the pigment into the water. I used a spectrophotometer to measure the percent transmission of light as a measure of pigment concentration in the water.

The significance of these findings is that there is a way to save cells and preserve them. This also indicates that someday, people may be able to freeze animals or humans and bring them back to life.

What will pass through a cell membrane?

What will pass through a membrane? Starch and sugar are being tested in this experiment to see if they will go through a membrane. The starch molecule is much bigger than the sugar molecule, being that the sugar I used is a simple sugar (glucose). The sugar should be able to go straight through the membrane, however, the starch will be too big to.

I hope to accomplish being able to make a "cell" and really be able to see how a membrane guards the cell. An experiment on cells last year in school prompted my research and sparked my curiosity for chemistry altogether.

Is it possible to preserve cells during freezing?

I hope to accomplish the preservation of cells in freezing conditions. An idea from my science teacher prompted my research. I was very anxious to see how to preserve cells even after freezing them.

The two groups within carbohydrates are called starches and sugars. The general formula for carbohydrates is (CH2O)n. ("n" is the number of carbons in the backbone) One carbohydrate is called a simple sugar or a monosaccaride. Glucose, like galactose and fructose, is an isomer. An isomer is a compound which differs in structure but not in molecular composition. Disaccharides are two monosaccharides combined in a condensed reaction. Polysaccharides are simple sugar building blocks bonded together to form chains.

Glycogen, or animal starch, is a place to store energy in animals. Glycogen is made up of glucose molecules strung together in a highly branched chain for animals. In plants, however, glucose in the form of a polysaccharide and a monosaccharide is also called a starch. Starches are metabolic reserves which are manufactured by green plants through photosynthesis. (Starches occur in the form of grains.) There are two basic forms of starches, unbranched chains that coil, and branched chains which are similar to glycogen.

Some water may be taken out of cells that are not protected, through, by using a hypertonic solution. ( Through there are many types of hypertonic solutions; this one would probably contain either sugar or salt in it.) This hypertonic solution would also probably also have to totally surround the cell so that there will be diffusion taking place going out of the cell. Diffusion is the movement going into or out of a cell from a place of high concentration to a place of lower concentration. Not all things, however can diffuse into a cell. The object must be small enough to pass through the cell membrane. (The cell membrane is made of mostly lipids which have very tiny holes in them.)

The data in this project tells us where a rough boundary line is of how big a molecule can be and still be able to diffuse through a membrane. This could help us understand why digestion is so important and takes so long to actually happen. This could also tell us what kinds of things you could actually have in your cells.

The data also tells us that it might be possible to freeze cells and bring them back to life afterwards. This is one of the first steps in the preservation of animals.

This information helps us understand the process of digestion. The food molecules have to be digested to a certain size for the cell to "accept" it.

My hypothesis, that the salt would preserve frozen beet cells, was correct. The jars with the most salt in the freezer were only affected by the freezing a little bit, while the jars with little salt were bright purple from dead cells.

This project proves that there is a way to save cells and preserve them. This also proves that one day people might be able to freeze animals and then bring them back to life. The significance of these findings is that if later in the history of the world, people could be frozen, then brought back to life so many years later, they would be able to tell much about history.

My recommendations for future study is to use a variety of cells and try preservation on as many as you possibly can; it may help history! Another recommendation would be to do further tests to see if the frozen cells actually survive after thawing. Also one could use different types of preservation to see what works the best.