Effect of Food On Mosquito Growth 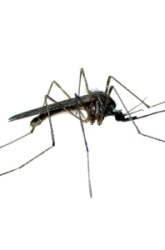 In this experiment I was trying to find out if you gave different amounts of food to mosquito larvae would they grow faster or slower. I got mosquito eggs and I hatched them out into tanks adding pork liver powder and Brewer’s Yeast to the tanks to see if it would make a difference. I watched them for two to three weeks and watched how many adults were in each tank. Note: Mosquitoes have four stages to their lives: eggs, larvae, pupae, and adult. I also found out that mosquitoes spend most of their time as larvae and pupae and that they are only adults to reproduce. Note: Adults only suck blood when they reproduce. The female has to have blood to reproduce so the male doesn’t suck blood. When the experiment was over there were various results in the different tanks. Note: Male mosquitoes are usually the first to hatch out and the females hatch out later. The main thing I found was that the more food there was in each tank the faster and bigger in appearance they grew.

What is the effect of food on Mosquito growth?

Introduction: I conducted an experiment to see how the amount of food affected the rate of growth of a mosquito. I got mosquitoes and grew them with different amounts of food.

In this experiment I learned that the more food the mosquitoes were fed the faster they would grow. I think this was because the more nutrients the mosquitoes had, the faster they would grow. There were some variables like sunlight. When it got later into the year there was less sunlight and that meant the days were shorter. Note: Mosquitoes don’t like direct sunlight. If you shined a light on them they would go the opposite direction of the light. I think this is why they grew faster in the second experiment. Another variable was the temperature. The room was 3 degrees (Celsius) higher than it was in the first experiment. The second experiment had more adults hatch out than the first experiment. So temperature and sunlight affected the rate of growth of the mosquitoes.

This experiment is like real life because people have to control the mosquito population. A few of the ways people could control the population is they could put fish in their ponds and other aquatic life to eat mosquito larvae. Plus people could maintain their ponds so as to keep food and trash out of their ponds. Another way is to get rid of water that is laying around like buckets full of water from rain and any thing that can hold water. Things like this are very good places for mosquitoes to live because the water consists of algae and lots of dirt and leaves. People could also use safe chemicals in places they can’t dump or get rid of like pools and ponds. Bt is one of these chemicals. People can use it on pools and ponds because it doesn’t harm people or animals but it does kill some types of bugs including mosquitoes.