Effect of Soaking Potatoes on the Frying Process 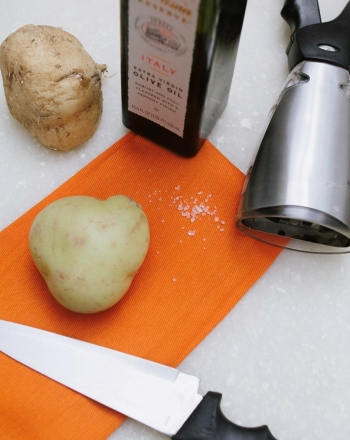 The goal of this experiment is to learn about starches in food and demonstrate how manipulation of these starches affects the taste of food. Students remove starches by soaking potatoes, and learn how this affects the quality of food.

Whether it’s the straight-chain amylase chains or branched amylopectin chains, potatoes are largely made from starch. This starch plays an important role in the cooking process. As food scientist Harold McGee explains, modern deep fryers often operate at two temperatures. Starches leak out during a first low-temperature frying and form a gluey layer on the surface of the potato. Browning takes place during a second high-temperature frying, which develops the taste and crispness of the potato. Something similar takes place when sliced potatoes are soaked in water. In addition to drawing out potassium, soaking also draws out starches – doing something similar to the first low-temperature fry. Coating the potato in cooking oil and baking it has the effect of crisping the surface starch, just like the second high-temperature fry.

McGee, Harold. On Food and Cooking: The Science and Lord of the Kitchen. Collier Books (1984)