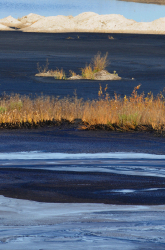 The purpose of this project was to investigate the factors that might affect the dispersion of oil in water. The variables were chosen to imitate the ones that might be involved in an actual oil spill such as the deep water horizon (the BP rig) or the Exxon Valdez rig that spilled oil on the Alaskan shore. The variables tested were temperature, wind action, and water agitation. The hypothesis was that water agitation would cause the greatest amount of oil dispersion.

The experiment was conducted by adding five different types of oil to a large water filled basin. After one minute, the oil spread diameter was measured. This was repeated with water at 5°C and at 35°C. Wind action was added through the use of a fan, and wave action was manually created.

The oil dispersed the greatest amount with the high speed wind action. Also as expected, the colder water resulted in less rapid oil spread. In addition, the water agitation produced wider oil spread diameters. Thus, the hypothesis was not supported. This project emphasizes the complexity of controlling a massive oil spill into aquatic environments.

This entire project took 2 ½ months. I spent days during Christmas vacation, and many days and weekends after school in the science lab at school. This was not a difficult project, but it was time consuming. I enjoyed this project because I felt like I was looking into matters that are important to us today. I wanted to know how oil would react in different temperatures. I learned that the temperature causes a significant difference rate of spread in oil. Along with movement, it increases even more. This allows me to know that when the people are dealing with the Oil Spill issues, that the most harm is done when the water is 17°C, high wind speed, and water agitation. I was amazed at how only one drop of oil spread so quickly. It is mind boggling to think of the millions of gallons that have been spilled into the oceans and how far it has been spread.

My project is about seeing what conditions cause oil to spread the fastest in water. My goal was to understand what scientists dealt with and are dealing with on the coast, as well as to know how fast different accidents need to be handled properly to prevent any further damage.

Gathering the materials for this project was not difficult since my teacher had the majority of the materials.

On April 20, 2010, an explosion in the Gulf of Mexico oil rig killed 11 workers and marked the beginning of BP oil spill which is now being called the largest environmental disaster in America's history. Oil gushed from the well 1,500 below the surface. Many variables affected the rate that the oil spread throughout the gulf. (1)

More than 20 years before on March 24, 1989, a tragic environmental accident occurred when the Exxon Valdez supertanker ran aground. It was a disaster that the company deeply regretted, but despite efforts undertaken to stabilize the vessel and prevent further spillage of oil, more than 250,000 barrels of oil were lost in just a short period of time. (2)

The first oil well was drilled in the Pennsylvania region by Edwin Drake in 1859. The well was 69 feet deep and produced 15 barrels a day. The area quickly boomed and the modern oil industry was born. Today, the top three countries that the U.S. imports oil from are Canada, Mexico and Saudi Arabia. (3)

In an attempt to try to meet the rising demand for crude oil people started off shore drilling. Offshore oil production involves greater environmental risks, most notably oil spills from oil tankers or pipelines transporting oil from the platform to onshore facilities, and from leaks.

Whenever oil is recovered from the ocean floor, other chemicals and toxic substances come up too like mercury, lead and arsenic that are often released back into the ocean. In addition, seismic waves used to locate oil can harm sea mammals and disorient whales. (4)

The water in which oil is spilled is not the same; some are spilled in salt water some is spilled in warm water, as well as cold water. Oils from different wells have many different densities this along with its surroundings effect how fast the oil spreads. The wind speeds, water agitation, and the different water temperatures.

Crude oil varies greatly in appearance depending on its composition. It is usually black or dark brown (although it may be yellowish, reddish, or even greenish). In the reservoir it is usually found in association with natural gas, which being lighter forms a gas cap over the petroleum, and saline water which, being heavier than most forms of crude oil, generally sinks beneath it. Crude oil may also be found in semi-solid form mixed with sand and water. (6)

Offshore oil production involves environmental risks, most notably oil spills from oil tankers or pipelines transporting oil from the platform to onshore facilities, and from leaks and accidents on the platform. Produce is also generated, which is excess water from oil or gas production and includes varying amounts of oil, or other chemicals used in, or resulting from, oil production. According to the organization Culture Change Gulf of Mexico rig dumps about 90,000 tons of drilling fluid and cuttings over its lifetime, with its wells also contributing with heavy metals. (7) But, how it spreads depends on the variables of its surroundings such as water temperature, wind, and water agitation.

The purpose of this project was to identify the variable that most greatly affects the oil that is being spilled into water environments. The research hypothesis for this project was: It is hypothesized that water agitation will cause the greatest rate of the diffusion of crude oil.

To simulate the effect of wind, the oils were added to water while air was blowing onto the water. All oils dispersed the greatest amount with the highest wind speeds. With the wind blowing at a rate of 19 kilometers per hour, all oils dispersed a total of 53 cm in diameter. With the lower 9.33 km/hr wind, all diameters were less except for the light weight 37 gravity oil which speeds as much as it did with high wind speeds. These results show that with more wind, greater water movement occurs and thus greater dispersion of the oil occurs. 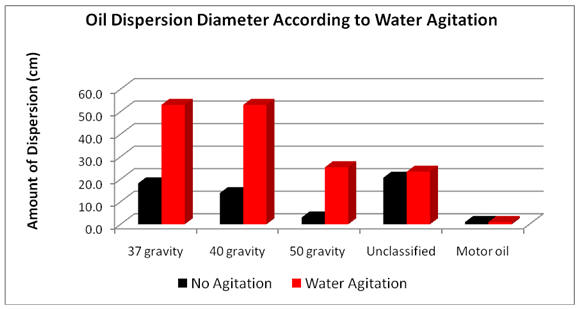 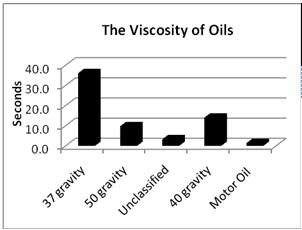 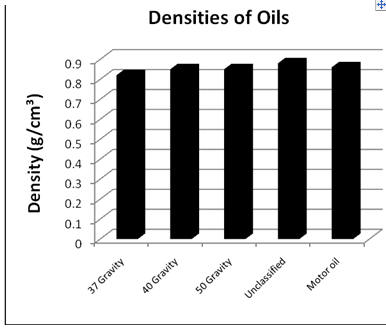 From analyzing the data, mid range temperatures of 17^(0) C, high wind speed, with agitation causes the most impact on the spreading of oils.

Possible improvements that could be made include conducting the experiment again with the 35^(0)C water using a different hot water source. The water used appeared to have sediment particles from the hot water tank that may have influenced the dispersion of oil. An addition to this experiment would be to include different salt solutions into the water, to simulate the amount of salt in oceans.

Through this experiment, I have learned that temperature causes a significant difference in the rate of the dispersion of oil. Also, the more movement there is within your water, increases the dispersion of oil. This knowledge allows us the assurance that when people are dealing with Offshore Drill Spills that the environment is harmed the greatest when the water is 17^(0) C, high wind speed, and water agitation. During my experimentation I was amazed at the diameter that only one drop of oil spread and I caused me to think about the millions of gallons that have been spilled in to the oceans and how far that oil must have spread.

Oil spills are environment catastrophes that oil companies, government officials, and societies must work together to prevent and remediate as quickly as possible when they occur.

I would like to thank Mrs. Eden's for her encouragement and guidance that has helped though out the lifetime of this project.  I would also like to thank my parent s for the support they have given over the past few months by dedicating their time and effort to help me.