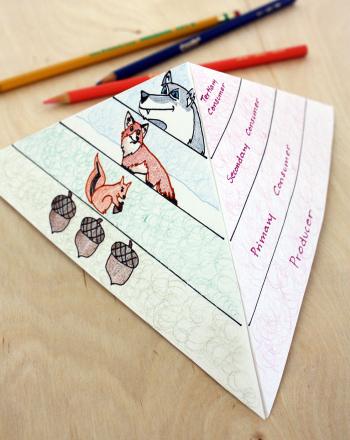 What plants do the animals in your area like to eat? Think about the plants that live in the wild areas around your home. If you live in a coniferous forest, you’ll find the seeds and needles of coniferous trees and berries from bushes. In a deciduous forest, you’ll find broad-leafed trees and shrubs. Take a walk in a local state park and bring a plant identification book along. Can you identify some of the plants that you see?

A consumer is an animal that eats other living things in the forest. For instance, a squirrel might munch on some nuts, seeds, or plants. It’s called a consumer, and since it eats plants, it’s called the primary consumer.  Animals that only eat plants are called herbivores. There are many herbivores, both large and small. Caterpillars eat leaves, and so do deer!

As you walk through the forest around your home, can you see any clues that tell you what animals like to eat the plants that you found?

Now we come to the meat-eaters, or carnivores. These animals eat other animals. Animals that eat both plants and animals are called omnivores. “Omni” means “all” or “everything.”

Eventually, the food pyramid reaches the top. There’s an animal there that doesn’t get hunted by many other animals. That animal is the ultimate consumer, or the top predator. There are not very many of these animals.

A predator is an animal that hunts for other animals. In some food chains, this large predator might be a wolf or a cougar. In a bird food chain, it could be an animal such as an eagle.

What are the top predators in your area?  What do they eat? Can you think of anything that would eat them or hunt them?

In real life, there are a lot of food chains. A food chain is a line-up of plants and animals that shows you who eats what. All of these food chains weave together like a web.  This is called the food web.

If you’re a prey animal, many animals hunt for you. If you’re a predator, you might hunt for many animals. If you’re an herbivore, you likely eat more than one type of plant. Even plants are part of the food web, because they eat the nutrients from dead plants and animals. Some animals help plants access these nutrients. They’re called the decomposers, and their job is to break things down. Worms are a good example of a decomposer.

Sometimes you might also hear the term “food pyramid.” For example, a big bird needs to eat many rodents to survive, and the rodents need to eat many insects. The inscects need to eat a lot of grass. As you go down each level of the food chain – or each trophic level – you’ll find that it takes more and more of each type of animal or plant to feed the next level up. It takes a lot of grass to feed the insects that feed the rodents that feed the hawks (the ultimate consumer).

Create a forest food web and discover the connections between animals that live in your area as well.

It’s amazing how many connections there are between different plants and animals in the forest. How many food pyramids can you create for your area?