Germination: "The Birth of a Plant" 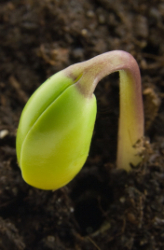 Research: Germination is when a plant seed starts to sprout. A seed needs oxygen, water, certain temperatures, and energy to germinate.

Purpose: The purpose of my project was to determine which type of seed would germinate the fastest. I would be comparing wheat, sweet corn, field corn, soybeans, peas and sunflowers. I also wanted to test the effect of presoaking the seeds compared to starting with dry seeds.

Hypothesis: My hypothesis was that the wheat seeds would germinate the fastest due to their size.

Procedure: The experiment was conducted as follows:

Results: During both of the tests, the results were always the same. The soaked wheat seeds germinated first. They were followed by the soaked field corn, sweet corn, and soy beans in that order. The non-soaked wheat and field corn eventually germinated but not as quickly as the soaked. See following pages for observation records.