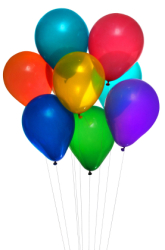 Most of the materials are readily available at home. Balloons may be purchased at stores such as Wal-Mart, Kmart or local toy stores.

One week.  This includes collection, recording and analysis of data, summary of results and completion of bibliography.

To determine whether the color of your hair affects how much static electricity it carries.

The student will become acquainted with some of the basic static electricity concepts, such the atom and its parts: the nucleus, neutrons, protons, and electrons.  Basic concepts include:

This science fair experiment also serves to acquaint students with the essential processes of scientific inquiry such as using a control, identifying dependent and independent variables, data collection, pictorial and graphic presentation of data, and of making accurate judgments as to the validity and reliability of their findings.

In each section of the experiment, use charts to display the obtained data such the following sample:

Amount of Time Balloon Stuck to Wall in Seconds Subjects