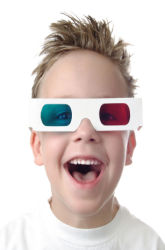 Humans use what is known as binocular vision to perceive depth and see the world in 3D. The binocular vision system relies on the fact that we have two eyes, which are separated by a small distance. This separation causes each eye to see the world from a slightly different perspective. The brain fuses these two views together. It understands the differences and uses them to calculate distance, creating our sense of depth and ability to gauge distance.

Red and blue 3D glasses attempt to mimic normal sight, and to play a trick on the brain. This is done by creating two very similar images on a flat surface, one overlaying the other. The first image is in red, and the second image is in blue. In 3D glasses the right lens is usually red, and the left usually blue in color. This means that the right eye picks up the first image, and the left eye picks up the slightly different image. The slight difference in perspective, and the fact that each eye can only see one image which looks to be the same one, creates an illusion of 3D.

High Definition (HD) glasses allow the wearer to see 2-demensional images in 3D, by the process of selective refraction (bending of light) through the lens changes the perceived depth of different colors. Unlike the traditional 3D process that requires 2 images, HD information is encoded from a single image through the use of binary optics and color, for example an image composed red and blue when viewed through the HD glasses the color red appears to move toward the foreground and off the face of the paper (or screen) whereas the blue appears to move back behind the paper with the other colors of the spectrum taking depth positions in corresponding order (red, orange, yellow, green and blue).

Also unlike traditional red/blue 3D glasses the choice of background color is the most important factor in determining the colors which should be used to achieve the 3D effect when wearing HD glasses. The easiest and most commonly utilized background colors are black and dark blue. This is probably why so many underwater scenes and space scenes produce very good 3D images when seen through HD glasses. Bright florescent colors, as well as mixed tones such as brown also produce good 3D effects.

Holograms are photographic images that are three-dimensional and appear to have depth and appear to “pop out” of the media which it is printed on or illuminated from. Holograms work by creating an image composed of two superimposed 2-dimensional pictures of the same object seen from different reference points.

The ChromaDepth® 3D process enables HD glasses to take 2 dimensional images and produce holographic 3D which means that the images appear “floating” in a holographic space, that is, parts of the image appears to be hovering above and other parts below.  What is actually being seen is a very high quality full color hologram.

*Safety: Do not look directly at very bright light sources or the Sun while using the HD and 3D Glasses as it may cause permanent eye damage!