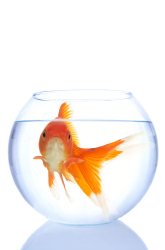 Create a hybrid species of fish.

The purpose of this experiment is to take fish of two different species in an attempt to create a hybrid of the two.

Hybrid species do not occur often in nature, though there are a few known instances. Usually, hybrids are created with the help of humans. Hybrid animals are often useful to us in some way, such as the hybrid cross between a horse and a donkey known as a mule. For many species that are capable of creating a hybrid, the offspring are unable to breed. This helps keep a species from being polluted with the DNA of another species. Occasionally, though, the hybrid is able to breed, though it will sometimes have difficulty doing so.

You can borrow a tank from a friend or science teacher if you don’t want to purchase one. Guppies and endlers can be bought from a pet store but you’ll need to make sure that you get true endlers. Check the shape of the tail that it is round and short.