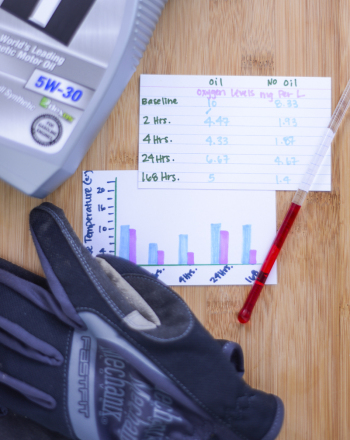 The Project "Let me Breathe Please!!!" was done to test the concentration of dissolved oxygen in the water, when it has oil and without oil. This idea came to mind when the news was on discussing the issue of oil spills.

This will help the environment and the society. Marine life need a certain amount of oxygen to live. If the oxygen level is lower than what they can handle they will be severely harmed. Also the animal's life will be in danger if the temperature in the water varies, going higher or lower than the average temperature.

To complete this project, water was collected from Mission Bay, in two different containers. One container consisted with only water and the other with a layer of motor oil. Every two hours, the oxygen level would be tested to see if the level would vary from time to time.

The project "Let Me Breathe Please!!!" Was done to test the effect of oil spills in the ocean on the concentration of dissolved oxygen in the water. It was also done to see if the temperature would be affected by the oil spills. These days, oil spills are a big concern and it is affecting the animals and the environment. If the concentration of oxygen drops, the life in the ocean will probably be harmed because marine life have a specific amount of oxygen that they need to live. Also if the temperature got colder or warmer than a certain level than the marine life will also be harmed. This project will benefit the society because they will become more aware on the damage that the oil spills do. If they pay more attention they would work harder on solving this devastating issue.< /p>

Oxygen is probably one of the most common elements known by man. It is used in almost everything, combining with other elements making new substances. The element is represented by the letter O. A very common substance that humans would not be able to live without that combines oxygen is H20. H20 is commonly known as water.

Not only does oxygen help humans live but plants and every other living things too. Plants make oxygen for animals and people to breathe. Then as humans breathe out carbon dioxide, the plants take it in.

Like humans, Animals in the ocean need to breathe too and they need oxygen just like us. As a fish or any other aquatic creature swims, water moves past their gills, Dissolved oxygen is moved from the water to the animals blood. Dissolved oxygen is the amount of oxygen dissolved in a body of water as a sign of the degree of health of the water and its ability to support a balanced aquatic ecosystem.

Like humans, plants also need to eat, but they do it in a completely different process. Plants eat using a process called photosynthesis which actually is done by mostly using the sun. The word photo means "light" and synthesis means to "put together".

Plants are like the opposite of human beings. Plants breathe in carbon dioxide and release oxygen. On the other hand, humans inhale oxygen and exhale carbon dioxide. Life is like a cycle, without plants humans would not be able to live, because they make oxygen for them to breathe. This affects the oil spills because the plants will also be harmed which may stop their giving out of oxygen.

Motor oil is a thicker substance, which means it has a high viscosity. The viscosity of the oil is very important. The oil must have a viscosity high enough to be able to grease around the motor parts but a viscosity low enough for the oil to easily flow through the different parts.

Hypoxia is a condition that is often very unhealthy and it damages the body. Hypoxia is basically when either the whole body or just a tissue of the body is deprived from oxygen. This condition is often started by when there is lack of oxygen in the area. This condition, hypoxia actually occurs to less sick people than healthy people.

It is often occurred when stepping on a higher altitude. When a human reaches a higher altitude, such as the mountains than their lungs have harder time breathing. As humans we are not used to areas with less oxygen and it is very hard for us to breathe up there because to survive we need to breathe in oxygen and breathe out carbon dioxide.

Another area or situation hypoxia might occur in is in the water. Like when a diver is diving into the depths of the ocean than the diver must make sure they have enough oxygen for them to breathe. But as the tank begins to empty and the diver goes deeper into the ocean he may need more oxygen. His oxygen is low, and because of the pressure of the water as the diver goes deeper and deeper than he might get hypoxia.

The Gulf of Mexico is more commonly known as the dead zone. The reason for this nickname is because the oil spill was caused in this area. Also because when there is a lot of oil in an area it causes hypoxia; this may cause deaths or severe damage.

When looking for oil, the machines may have a hit the wrong spot which would cause an oil spill. Another reason for an oil spill would be if a ship or any other mean of transportation dropped oil. The vehicle, a ship for example, would be sailing with a load of oil in its storage. The oil may be too heavy or it would leak of the ship, causing a deadly situation.

This will cause surely cause deaths in the marine life and may even harm us humans.

The oxygen in the water can drastically change over time. The amount depends only on one thing, the temperature.

A commonly used method by scientists is called titration. This method is used to determine the unknown concentration of a known reactant. For example, titration would help see how much oxygen is in the water because the precipitant would change colors, as in the project that is being done.

The dissolved oxygen kit consists of a nail clipper, a narrow glass tube, a stopper, a bottle, Sodium Thiosulfate, and three very important reagents. Each of the reagents is needed to complete the testing of oxygen correctly.

The first reagent, Dissolved Oxygen 1 Reagent, is made out of manganous Sulfate. The chemical formula for this reagent is MnSO4·4H2O. Manganous Sulfate is used in medicines, and actually many things used in everyday life. Actually, this sulfate is most commonly used on plants. It is added to the soil to help increase the plants growth.

The second reagent, Dissolved Oxygen 2 Reagent, is made out of KI, LiOH, and NaNH3. Because these three substances are mixed to make the second reagent, there is a small amount of each. There is 0.113 g of KL, about 5.41E-3 g of LiOH and 4.04E-3 g of NaNH3.

The third and last reagent is Dissolved Oxygen 3 Reagent. This reagent is made of Sulfamic Acid. This acid is also known as amidosulfonic acid. The chemical formula for this molecular compound is H3NSO3. Sulfamic acid is used a lot in dyes and in places or companies that deal with pigments and colors. In the Hach kit, the third reagent contained 1.52 g of Sulfamic Acid.

Further exploration is going on. Scientists are trying to find a way to clean all the oil. This issue is taken very seriously. This will make the world a better place if everyone cares about the environment. 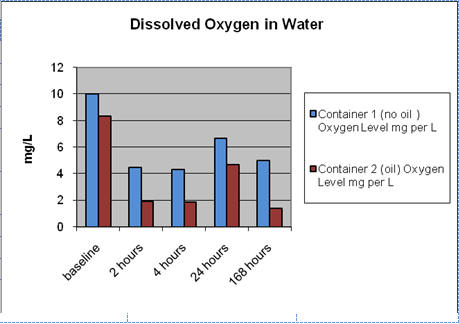 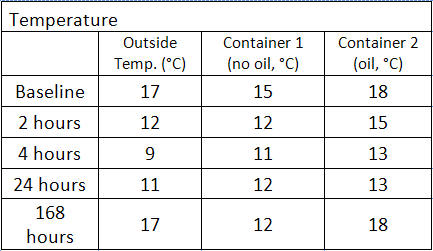 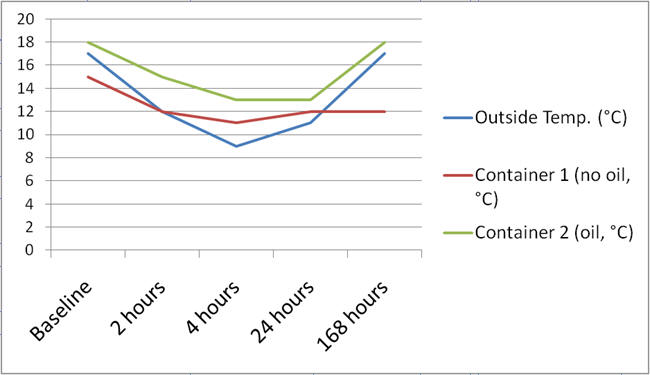 The results of the project actually agreed with my hypothesis. In the container with oil there was a dramatic drop of oxygen. The oxygen went down by about three to four mg/l. Not only did the oxygen have a difference than the container with only water but so did the temperature. The container with oil was always a few degrees warmer. This was because the layer of oil served as an insulating blanket. As a community we should all get together and find ways to prevent oil spills.