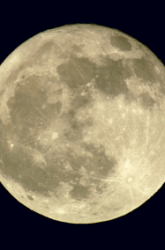 Purpose: The purpose of this project is to determine whether or not a top will spin longer on a full and new moon, as compared to a half moon when measured in seconds.

Place top in its respective, automatic spinner and turn until the spinner clicks ten times

2)      With a metric rule, level top 2.5cm off the ground and pull the spinner’s trigger at appropriate* time

3)      At the same time the trigger is pulled, press the “start” button of a stopwatch

4)      When top stops spinning, write down the time recorded by the stopwatch

*Because time is the dependent variable, the time the top is spun varies for every top in each trial. This project’s time was every four minutes from 8:00pm to 8:36pm.

Conclusion: Though the moon is scientifically proven to have a measurable effect on the gravity, and therefore, the movement of objects on Earth, the moon does not have a strong enough effect on a top to make it spin longer during a full or new moon when measured in seconds.

This project is to find out whether or not the phase of the moon effects how long a top spins. This project includes a basic understanding of physics.

Top and spinner can be found at your local dollar store

Newton’s law of universal gravitation states that every object the in the universe has a gravitational pull on all of the other objects in the universe. Just as the Earth pulls on the moon, the moon pulls on the Earth to create tides. The part of the Earth that is facing the moon receives the greatest amount of gravitational pull from the moon; this is one of the sides of the Earth that experiences high tide (this effect is called tidal force). The moon is not the only extraterrestrial object that affects tides, the sun also plays a part in the movement of Earth’s oceans, though not as large a part as the moon. The sun’s tidal force is about forty-six percent of that of the moons. But, when the sun, the moon, and the Earth are all aligned, the sun and the moon’s gravitational force combine to increase the pull on Earth and less the gravity the Earth exerts on other objects (these tides are called spring tides). The moon is aligned with the sun during new moon (the moon is between the earth and the sun) and full moon (the moon is on one side of earth and the sun is on the opposite side). (De Pree, C. Ph.D., & Axelrod, A., Ph.D., (2008), Groleau R., (2002), Enchanted Learning.com, (2010))

In conclusion, the moon’s effect on Earth is greater than one many may think. But, can this this scientifically proven effect on Earth answer the question of its effect on the spinning of a top? Yes, because the moon’s gravity pulls on the Earth and all its contents, this lightens the force of gravity the Earth exerts on the objects in and around it. The less gravity being put on an object on Earth, the less it weighs. Objects with less weight have less friction and inertia and a weaker moment of inertia. With less friction and a weaker moment of inertia a top should spin longer. The moon’s gravitational pull on Earth is strongest during new moon and full moon, so, according to theory, a top should spin longest during a full and new moon.

*Because time is the dependent variable, the time the top is spun varies for every top in each trial. This project’s time was every four minutes from 8:00pm to 8:36pm. 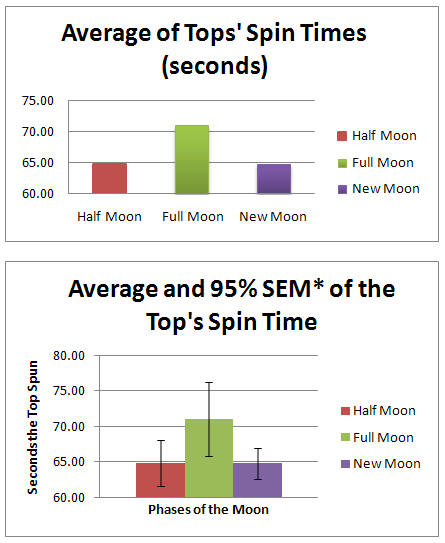 Though the moon does have an effect on Earth and the objects within it, according to the experiment’s data, the phase of the moon does not have an effect on a spinning top that can be measured in seconds. This means a top does not spin longer on a full and new moon as compared to a half moon when measured in seconds. These two facts are proven because the SEM (standard error of the mean) of the trials overlap which means there is no true difference between the average spin times of the top during differing phases of the moon. A 95% SEM shows that if an experiment is repeated with the same number of trials, the experimenter can be 95% sure that the average outcome will be within the SEM.

The outcome of my experiment may have been different if a stopwatch that counted smaller time measurements was used.

Use a stop watch that measures to smaller decimal place