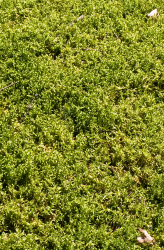 To determine whether spreading a moss soup over an area increases moss growth.

Does creating a moss soup lead to moss growth on paving stones?

Moss is an intriguing plant. Like ferns, it reproduces through spores. These spores float through the air or the water to land and create new moss plants.

While some people struggle to remove moss from their lawns, others love the look of moss. A cottage garden or an Asian-inspired garden is the perfect place for a moss garden. Those who create bonsai also love adding moss to the base of these small plants. In this experiment, you will explore moss reproduction and determine whether mixing moss in a slurry and spreading it on the ground can help moss spores move around the garden and begin to grow.

Terms/Concepts: Learn how moss reproduces;  Learn how to make a moss soup

The Artistic Garden. How to Grow Moss Technique.