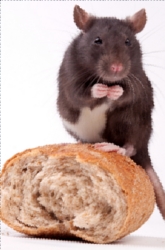 Learn about the difference between a species and a breed.

The purpose of this experiment is to breed a pair of mice, a pair of rats and a mouse and a rat in order to learn about the difference between a species and a breed.

Even scientists sometimes have trouble telling the difference between a species and a breed. Every year, animals are reclassified when we learn more about their genetic compatibility. For years, a species has been defined as a population that is capable of interbreeding, but recent developments in our understanding of genetics has altered our understanding slightly. Now, a species is a group of animals that not only can, but does interbreed. Isolated breeding populations, if kept from the larger group, do eventually evolve into their own species. Usually, species of animals look similar from member to member. The main exception is the domestic dog, which comes in many different shapes and sizes. Though a Chihuahua and a Great Dane may look very different, they can be interbred, and are thus different breeds of the same species of animal. Learning about which types of animals are distinct breeding populations and which types of animals are actually breeds of the same species is important so that scientists can further understand the evolution and the differentiation of animal species.

You can purchase the needed supplies at a pet store. It may also be possible to borrow cages and even mice and rats from friends or from your school’s science lab. Your local pet store will usually take baby mice and rats once they are old enough to be separated from their parents, but you should check with them first.

Ninjas vs Zombies
Worksheet
Ninjas vs Zombies
It's ninjas vs zombies! Who will win? Flex your imagination to create a funny or crazy story to answer this writing prompt.
5th grade
Reading & Writing
Worksheet
Brown vs. Board of Education
Worksheet
Brown vs. Board of Education
In this Brown vs. Board of Education worksheet, children read the story of how the landmark decision came about, as well as the struggle that followed.
5th grade
Social studies
Worksheet
Growth vs. Fixed Mindset
Worksheet
Growth vs. Fixed Mindset
In this social emotional learning worksheet, students collaborate to write and perform a skit that demonstrates their shared understanding of a growth vs. fixed mindset.
4th grade
Worksheet
Making a Hybrid
Science project
Making a Hybrid
Science fair project which attempts to create a hybrid fish species by breeding two different species of fish together.
5th grade
Science project
Zombies vs Vikings
Worksheet
Zombies vs Vikings
...writing prompt, creative writing, writing composition, story starter, zombies vs vikings...
5th grade
Reading & Writing
Worksheet
Further vs Farther
Worksheet
Further vs Farther
...further vs farther, grammar, writing, 5th grade writing, 5th grade reading...
5th grade
Reading & Writing
Worksheet
Monarchy vs. Democracy
Worksheet
Monarchy vs. Democracy
...Give your child a quick rundown of the differences between the two from this worksheet. democracy vs monarchy, monarchy, democracy, monarchies, monarchy democracy...
5th grade
Social studies
Worksheet
"Ser" vs "Estar"
Worksheet
"Ser" vs "Estar"
...Is your foreign language learner having trouble determining when to use "ser" vs. "estar" in Spanish?...
4th grade
Worksheet
Growth Mindset
Lesson plan
Growth Mindset
They will then collaborate to design their own skits about growth vs. fixed mindsets.
4th grade
Lesson plan
Curiosity vs. Boredom
Activity
Curiosity vs. Boredom
... In this social emotional learning activity, your child will explore the difference inherent in boredom vs. curiosity by participating in a mindfulness practice...
4th grade
Activity
Simile vs. Metaphor
Lesson plan
Simile vs. Metaphor
...Support: Have struggling students create a simile vs. metaphor anchor chart as a graphic organizer to be used throughout the lesson....
5th grade
Reading & Writing
Lesson plan
Multitasking vs. Mindfulness
Activity
Multitasking vs. Mindfulness
...They will be guided through a mindfulness activity, and then asked to compare multitasking vs. mindfulness in terms of productivity and calmness....
4th grade
Activity
We enable strictly necessary cookies to give you the best possible experience on Education.com.Cookie policy