Log in with different email
For more assistance contact customer service
Entire library
Science projects
Which of two superabsorbent polymers is the most absorbent?

Which of two superabsorbent polymers is the most absorbent? 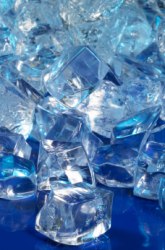 A  polymer is a chainlike, high-molecular-weight natural or synthetic organic compound, whose structure is made up of repeating smaller units called monomers. Polyethylene, rubber, and cellulose, are examples of polymers.

A crystal or crystalline solid is a solid material whose atoms, molecules, or ions are arranged in an orderly, repeating geometric pattern.

This superabsorbent polymer compound has very long carbon chains bonded with sodium atoms in the center of the molecule in repeating units of -CH2-CH(COONa). When sodium polyacrylate is exposed to water, the higher concentration of water outside the polymer draws the water into the center of the molecule via osmosis. Sodium polyacrylate will continue to absorb water until there is an equal concentration of water inside and outside the polymer. This forms a polymeric gel many times larger in size than the original powdered compound.

Superabsorbent polymers are being considered for use to solidify liquid waste because the polymer can absorb many times it weight in water with less than 1% increase in waste volume. Avoiding an increase in the waste volume also means fewer loads of waste being shipped to landfills. In this project, figure out which polymer would be most absorbent.

As an extension to this project, take the unused sodium polyacrylate granules removed from the diaper and place them in a dish. Add water, and once again the polymer will start absorbing the water and swelling. Keep adding water until the granules stop swelling.

Next, add table salt to the gel. This addition will cause it to turn back to a liquid because salt has a higher concentration of sodium ions on the outside of the polyacrylate particles. The water is attracted to the salt, which causes the water to leave the polymer particles. The particles then collapse and become a liquid again. This process is called osmosis.

Follow the same procedure using the hydrogel crystals to see if the same thing happens when salt is added to these crystals.