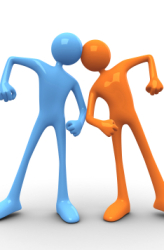 One to two hours to complete the experiment and collect the data; one day to prepare the science fair display

To investigate how friction affects motion

Friction is the force that works against things in motion. Friction occurs when two things rub against each other. Sometimes friction makes movement difficult. Other times friction helps movement. For example, without friction it would be impossible to walk. Without friction, your feet would slide all over the place.

In this investigation, different surface textures are tested for friction against a soda can rolling down a ramp.

Friction: a force that resists motion of solid surfaces

Force: the capacity to change or use energy

“Friction: Slowing Things Down” at http://home.clara.net/darvill/enforcemot/friction.htm

“What is Friction? at http://www.fearofphysics.com/Friction/frintro.html

Rough Draft
Worksheet
Rough Draft
Start with this Rough Draft writing template! This two-page lined worksheet is the perfect starting point for the rough draft—or first version—of the book report.
3rd grade
Worksheet
Wolf
Worksheet
Wolf
Wolves are an animal with a bit of rough past in Yellowstone National Park. Learn all about them!
3rd grade
Science
Worksheet
Olympic Canoeing and Kayaking
Worksheet
Olympic Canoeing and Kayaking
Is your child having trouble navigating the rough waters of reading? Hand her this worksheet about some Olympic events: canoeing and kayaking.
3rd grade
Reading & Writing
Worksheet
What Does the Graph Show?
Lesson plan
What Does the Graph Show?
...Since there were 30 bicycle riders and 10 car riders, I know that there were 20 more bicycle riders than car riders....
3rd grade
Math
Lesson plan
Rainbow Editing
Activity
Rainbow Editing
...What You Need: Colored pencils Rough draft of a written assignment Glue stick Paper Pencil Poster board What You Do: Reread the rough draft with your child...
3rd grade
Reading & Writing
Activity
Top Row Typing: R-U-E-I with Gem Miner
Game
Top Row Typing: R-U-E-I with Gem Miner
...Is your child a typist in the rough? Get some practice with this fun top row typing game, where each correctly typed word means another gem for Birdee....
1st grade
Game
Writing the Report
Worksheet
Writing the Report
...Use this Rough Draft worksheet to get started!...
3rd grade
Worksheet
Vacation Memory Book
Activity
Vacation Memory Book
...On lined, rough draft paper, have your child write a few sentences about each event shown on the time line....
3rd grade
Reading & Writing
Activity
Make Your Own Glass Cleaner
Activity
Make Your Own Glass Cleaner
...  Commercial glass cleaners are expensive and full of harsh chemicals that are rough on the environment and us....
3rd grade
Science
Activity
How to Make Knitting Needles
Activity
How to Make Knitting Needles
...Be careful: the tips will likely be rough and splintery. Have her sand down the tips of each chopstick with the coarse sandpaper....
3rd grade
Arts & crafts
Activity
Paper Towel Science Project: Capillarity
Science project
Paper Towel Science Project: Capillarity
...Ever notice how rough and flat the brown paper towels in your school restrooms are?...
3rd grade
Science project
Felt Egg
Activity
Felt Egg
...What You Need: White and yellow felt Matching embroidery floss and needle Stuffing or cotton balls What You Do: Help your child trace a rough, squat...
3rd grade
Arts & crafts
Activity
We enable strictly necessary cookies to give you the best possible experience on Education.com.Cookie policy