If you swirl water around in a cup, you’ll notice how easily and fast the water will move. But have you ever tried to swirl some maple syrup around in a cup? It doesn’t respond to your movements in the same way. Liquids have various properties that determine how they flow. One figure that’s used to characterize a fluid’s behavior is called the Reynolds Number.

Explore the concept of the Reynolds Number.

The scraper will affect the bubbles in the water, but it will have little effect on the syrup bubbles. The syrup bubbles just move right back to where they were.

The bubbles are showing you fluid flow, or the direction that syrup and water are moving in the fluid. They behave differently because of their viscosity, which you can think of as their molecular stickiness. When you move the egg beater in the syrup, the syrup next to the mixer moves, but also drags some other syrup along with it because the syrup is sticking to itself. The water isn’t as viscous, so only some of it is dragged along with the mixer’s movements. Also, since the water isn’t viscous, there isn’t as much of a pull slowing it down. When you increase the mixing speed and then turn off the egg beater, the bubbles might continue to spin for a moment before they slow down. The syrup will stop moving as soon as you turn off the beater. In this case, the fluid momentum is greater in water than in syrup.

This brings us to the concept of the Reynolds Number. The Reynolds Number is a ratio of how important inertia (an object or substance’s resistance to change in motion) is versus how important viscosity is in a fluid. You can calculate this figure by dividing inertial forces by viscous forces. When this figure is small (less than 103), viscous forces dominate the system. This situation creates laminar flow, where the fluid flows with no disruption in even, parallel layers (as with the syrup). When this figure is greater than 104, inertial forces dominate the system. This situation creates turbulent flow, where chaotic, circular eddies form that are difficult to measure or predict. 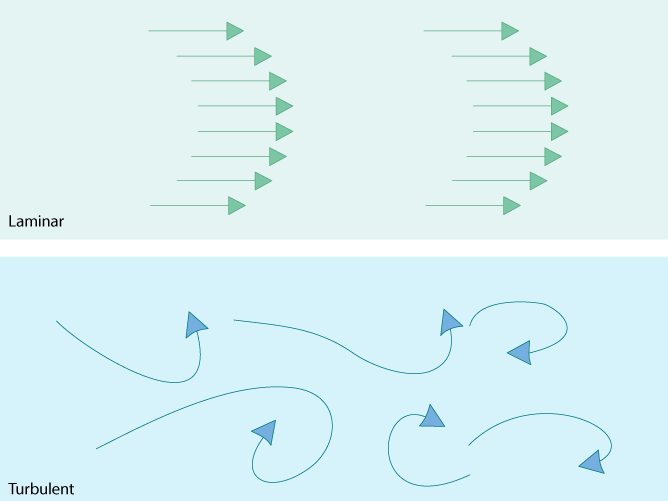