Log in with different email
For more assistance contact customer service
Outside the Classroom
Sippy Cups for Babies: The Big-Kid Transition 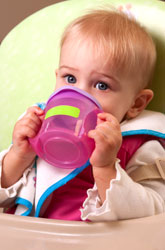 Collect This Article
by Education.com

Graduating to a sippy cup is an important milestone on your toddler's transition to a "big-kid" cup. However, these mess-minimizers have their share of critics, from dentists who warn about lisps, overbites and tooth decay to one parent who sued baby product-maker Playtex, claiming their sippy cup harbored mold she believes gave her child autism. Scientific studies have even linked them to chronic disease. Despite the risks, these tiny sippers can—when used correctly—be a safe, mess-free tool to help your toddler build the motor skills necessary to handle a regular cup. How do you know if you're using your sippy cup the right way—and what are the consequences if you don't?

Worrying about the critics can make you crazy, but navigating the world of sippy cups isn't as tough as it seems—you just have to look in the right place for answers. Here's a quick guide and a little expert advice to help you navigate the sippy cup minefield, and transition safely from the bottle.

Once you've got the facts, choosing the right sippy cup can be a painless process. There will still be spills and tantrums, but you'll learn to keep a towel handy. Stick to the rules, and you and your baby will get through this major milestone with flying colors—just in time for the next battle of wits!

Bookmark this to easily find it later. Then send your curated collection to your children, or put together your own custom lesson plan.